Students, Parents, Business Leaders Rally for "Seat at the Table" in Ed-Formula Re-Write 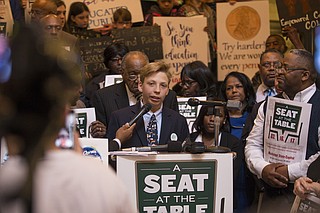 J.T. Grist, an eighth-grade student at Tupelo Middle School, spoke at the "Seat at the Table" rally on Thursday, March 16, saying all students deserve good schools, no matter where they live. Photo by Imani Khayyam.

JACKSON — Students, parents and advocates gathered at the Mississippi State Capitol on Thursday, March 16, calling on lawmakers to slow down the process of rewriting Mississippi's education funding formula and hold public hearings with parents, teachers and students before dramatically changing the way schools are funded in the state.

Howard Sanders, a former principal and superintendent of the Hollandale School District, called on lawmakers to fully fund the Mississippi Adequate Education Program before changing the formula.

"How do you know MAEP won't work if it's only been fully funded one time?" he said.

Leslie Frye, a parent of children in Starkville Oktibbeha Consolidated School District, said that consolidating the two school districts has helped save money, but asked why state leaders seem to be contradicting themselves with other policies.

"Last week our Senate (voted) to expand voucher programs; I'm confused by this," Frye said. "(We've) worked very hard for the last three and a half years to consolidate and combine and make one pot of money in my school district, and now you're legislating that people can take money out of that pot and go put it into other pots? This is a contradiction to me—this confuses me."

Students from Jackson Public Schools and Tupelo Public School District shared their stories with the crowd at the capitol this morning, which included several students out on spring break this week.

J.T. Grist, an eighth-grader in Tupelo, said the Tupelo school system is rated highest in the state, pointing out that the majority of students there attend public schools. He said that Tupelo schools are lucky because they have additional local resources that help make the public schools strong.

"All schools are not as lucky, though. I go to church with kids that go to a county school that do not have nearly the opportunities that we have in Tupelo; this is not right," Grist said.

Republican statehouse leaders plan to re-write the state's education-funding formula this year, and will likely roll out the plan in a special session. Using a proposal from New Jersey-based nonprofit EdBuild, state leaders are looking to move MAEP to a weighted formula, based on different factors of each public-school student. Meetings about the formula have mainly been behind closed doors—even for most lawmakers.

Read more about the Legislature's attempts to re-write the education funding formula at jacksonfreepress.com/edbuild.