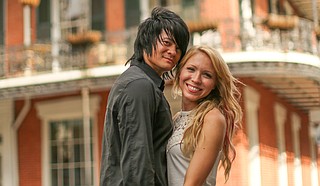 Brad Regan and Hannah Acey will marry in May of this year. Photo courtesy Josh Hailey Studios

This year, as he has for many years, Brad Regan of Julep Restaurant & Bar received the Best of Jackson awards for Best Bartender and Sexiest Bartender. But that's not the only good news in Regan's life.

Two years ago, Regan considered himself to be a player. No one could have told him that he would fall in love with Hannah  Acey, whom he met in October 2013. Neither of them was looking for love; they feel as though it just fell into their laps.

"I'm not a shy person at all. I can usually just run my trap, but I was really shy about asking her out," Regan says.

As Acey was leaving the restaurant that night, Regan asked her out to a car show, not knowing that they both had a love for cars. The two met at Regan's house before riding his street bike to the event. That was the beginning of their relationship.

"Ultimately, there was just an unexplainable attraction," Acey says. "This tingle in our guts that we still get every day." A four day hunting trip that Acey took in November 2013 to Kentucky revealed just how much they meant to each other. Although it had only been a month, Regan and Acey missed each other.

"I've never missed someone so much in my life. She's my best friend," Regan says. "And that's why I want to spend the rest of my life with her."

Acey was born in May 1989 to Terri Hall and Tim Acey and grew up in Terry. She graduated from Terry High School in 2007. In 2010, she completed her studies at Hinds Community College in dental assisting and oral surgery. She currently works at All Inclusive Medical as a medical-products distributor.

Regan was born in January 1984 to Bradley Regan Sr. and Jin Joo Jung, who grew up in South Korea. Regan graduated from Northwest Rankin High School in 2002. He received his cosmetology license from the Academy of Hair Design in 2003. He works at Barnette's Hair Salon as a hairdresser and at Julep as a bartender.

In January 2014, Regan began proposing to Acey every night for eight months, and each time she said, "Of course," though she knew he wasn't serious. Then, on July 1, Regan proposed to Acey in much the same way he'd done every night for the past eight months. Only this time, he slipped a three-carat Tiffany ring on her finger and proposed to her on one knee. Regan says he told Acey that he wanted to be with her forever.

"I cried. I was in shock. I expected it to be like every other time," Acey says.

Instead of candy and flowers for Valentine's Day last year, Regan started a new tradition. Because he's a longtime scuba diver, Regan thought it would be cool to take Acey to Miami and dive 35 feet under the ocean's surface so that she could get her scuba-diving certification. To keep the tradition going, Acey, who is now certified, surprised Regan this year with a trip back to Miami for Valentine's Day.

The couple is planning a May 2015 peacock-themed wedding at The South Warehouse in Jackson. Already devoted to one another, Acey and Regan don't feel like much will change once they are married, other than the additional closeness they haven't found, yet. They look forward to all the things they will experience with one another.