The King of Mississippi Seafood 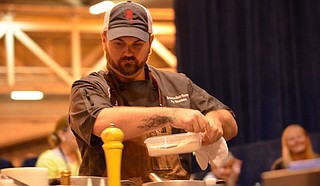 The aroma of shrimp and spices wafts through the crowd of food lovers, creating a rowdy murmur and the occasional sizzle at the Louisiana Restaurant Association's Foodservice & Hospitality EXPO at New Orleans' Morial Convention Center Aug. 8-10. Jazz plays loudly over the sound system as boisterous announcers intermittently make updates about the main attraction: the Great American Seafood Cookoff, Saturday, Aug. 8.

Each year, states across the nation host their own seafood cookoffs, and the winners from each state travel to Louisiana and show the spectators and judges at the event what they can bring to the table, prepping, cooking and plating their dishes within an hour. Before arriving at GASCO, Ty Thames first had to compete against the likes of Parlor Market's Matthew Kajdan and Hal & Mal's Ryan Bell, among others, for the title of the King of Mississippi Seafood.

The cookoff, which the Louisiana Seafood Promotion and Marketing Board started in 2004, has had several notable winners over the last few years, including Mississippi's own John Currence in 2008 and David Crews in 2013. Thames hoped to be Mississippi's third winner. At this year's event, Thames draws the third slot and at 12:30 p.m., and approaches his makeshift kitchen, which is positioned between New Jersey's Bryan Gregg and South Carolina's Ron Andrews. Emcee Cory Bahr counts down from five to signal the chefs begin. Thames starts cooking and finishes plating his food 10 minutes before time is called, to Bahr's surprise. "(Thames) is serious about what he does, and you can tell he is serious about this competition," Bahr says to the crowd.

Along with Thames' assistant for the cookoff, Derek Emerson of Walker's Drive-In, Thames began with some simple ingredients—fish, shrimp and oysters—and transformed them into the final product: dehydrated shrimp shell-crusted red snapper, saffron rice grits, oyster foam, a seabean salad, red snapper cracklings, and a side of injected raw Gulf oyster with a mignonette tapenade. In the end, Alaska's Beau Schooler beat out Thames and the other chefs and won this year's cookoff.

"I really enjoy hunting, but I believe in respecting the land, eating what you kill. I also recognize the problem with what we do to the ocean, I believe every chef has a civic responsibility to be aware of overfishing and the ways we impact natural resources," Thames told the Jackson Free Press.

He began working in kitchens at the age of 15 and attended the University of Southern Mississippi, where he earned a bachelor's degree in hospitality management in 1998. He then moved to Vermont to pursue culinary arts at the New England Culinary Institute and from there, apprenticed in Italy at Maria Luigia in Parma. After that, he moved back to the states, working at the Ritz Carlton in Washington D.C., before moving to Bethesda, Md., cooking at Italian restaurant Centro. Thames moved back to Mississippi to open BIN 612 in Starkville with his business partner Brian Kelley, in 2005.

The pair now own BIN 612, The Guest Room and Restaurant Tyler.