#ConfederateHeritageMonth: Your Essential Primer to How It Blew Up in Mississippi 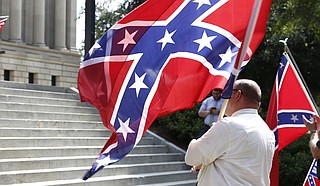 Mississippi is the last state with a flag that includes the Confederate battle emblem—a red field topped by a blue X dotted with 13 white stars. Photo by Imani Khayyam.

JACKSON — The facts are simple and, by now, well known: For years, both Republican and Democratic governors of Mississippi and other states quietly signed “Confederate Heritage Month,” or in some cases like Virginia, “Confederate History Month” proclamations. They like to do it in April because it "is the month in which the Confederate States began and ended a four-year struggle," as Mississippi Gov. Phil Bryant explains it. It is also the month when the state already celebrates Confederate Memorial Day on April 25 to "recognize those who served in the Confederacy."

Many people, though, hadn't realized that the practice is ongoing because its supporters tend to keep news of the proclamations deep under the radar, although they’re happy to tell the neo-Confederate groups that request the proclamations, like Sons of Confederate Veterans, about them, just not so much the rest of us.

When I heard in February that Gov. Phil Bryant had signed this year’s proclamation that month—during Black History Month, which he did not honor—I started casting about to find it. It wasn’t on his website then, with other proclamations he had signed. After some asking around, I learned that the signed proclamation was posted on the website of the Sons of Confederate Veterans, where I suspect it has been annually for years now. Let’s just say, it’s not a website that attracts a wide and diverse audience. It’s a good place for it to slip under the radar, only reaching its desired targeted Confederacy-loving audience.

Gov. Bryant’s spokesman, former Clarion-Ledger reporter Clay Chandler, does not typically return the JFP’s calls and emails and didn’t in February, as if that would make us go away. Someone I knew, an interested citizen, called the office, however, and confirmed that he had signed the proclamation. It was real, and in the year after a fan of the Council of Conservative Citizens had shot up a church in Charleston, S.C., prompting that state to lower its official Confederate flag, it was inauspicious timing. It also happened to come as a soon-to-be raucous and racially divided session of the Mississippi Legislature had gotten underway.

When I broke the story of Bryant’s Confederate Heritage Month proclamation on Feb. 24, it was two days after legislative leaders let multiple bills to change (and to keep) the Mississippi flag die on the governmental vine. The story, which I wrote while on vacation at the beach no less, blew up, quickly becoming the most viral story we had ever posted online.

Bryant has continually refused to address his official dedication of an entire month to the Confederacy, which formed to maintain and extend slavery, and in the state with the highest proportion of African Americans, many of whom descended from slaves. His spokesman, Chandler, did tweet a link out after my story went viral, indicating that they had updated the list of proclamations— which included Irish Heritage Month, but no Black History Month. That is, white folks got two months; African Americans none. Bryant did proclaim a day in honor of Vernon Dahmer Sr., however.

In their own words, Confederate leaders explain secession, the Civil War and their views about black people.

This month, as I'd hoped would happen when I revealed this year's proclamation, many people around the country—especially historians—are using the hashtag #ConfederateHistoryMonth on Twitter to share facts about the Confederacy that contradict the revisionist history many of us were taught in school, myths that helped romanticize the “lost cause” the Confederacy fought for—which was plainly stated repeatedly in official documents of the time.

The Jackson Free Press is participating in this truth campaign, sharing blog posts and links to long- and short-form pieces and columns we’ve published over the years on the topic. We urge you to spend some time looking through those tweets and sharing them with others, especially those by historian Jonathan Wilson (@jnthnwwlsn).

Our position is that the truth literally can set us free as a state—free to shed myths and vestiges of a very racist, brutal past and to use the knowledge of real history to teach our children well and to build strong alliances between all our citizens, regardless of race. Obviously, the Mississippi flag must change, but that must happen not because it would be “good for business” or even our reputation as a state. It must change because most Mississippians, regardless of race, finally come to terms with what it really stands for: a battle to maintain and expand slavery.

The Confederacy is indeed history we must study, but it is not a heritage of which we should be proud. It’s time to move on, Mississippi, into a brighter future not weighed down by mythologies and symbols of a dark past.

Donna Ladd is the editor-in-chief and co-founder of the Jackson Free Press. Follow her @donnerkay on Twitter.