Mississippi, Your ALEC is Showing 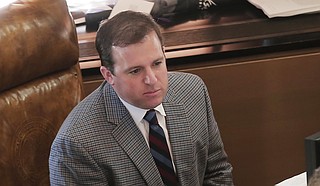 JACKSON — From laws that allow tax breaks for out-of-state businesses to the state's special-education voucher program, the Mississippi state Legislature has picked up and written into law model policy language from a national and controversial conservative organization, the American Legislative Exchange Council, or ALEC for short. ALEC creates and distributes legislative templates to state legislatures through its members—state lawmakers—in order to further its national political goals.

ALEC creates model legislation through its task forces, which not only include lawmakers but also members from the private sector who pay for membership. ALEC claims to stay out of the social arena for model policies (no abortion, immigration or religious freedom policies) when it comes to policy, but the organization was responsible in part for the surge in "Stand Your Ground" gun laws, after copying the law in Florida that helped provide a defense to Trayvon Martin's killer.

Mississippi has proved fertile ground for ALEC policies. From 2010 to 2015, Mississippi lawmakers introduced the most model policy bills from ALEC in the country, a University of Chicago "Data Science for Social Good" project found.

Sen. Josh Harkins, R-Flowood, was recently voted in as Mississippi's ALEC state chairman. He says that role rotates between the House and the Senate. Harkins' role as state chairman is to act as the middleman between members, relaying information about task-force meetings to Mississippi lawmakers who are members at ALEC. Members who are lawmakers have to pay $50 a year to be a part of the organization. Private-sector memberships for companies to join start at $3,500 for nonprofits and can cost up to $25,000. Harkins said the ALEC process is about ideas, and that it is largely up to lawmakers to bring legislation back to the Capitol and introduce it.

"It's mainly ideas, to me, that's what it is, and no one's ever told me, 'Hey go file this bill in your state,'" Harkins told the Jackson Free Press. "I've just gone to the (ALEC) meetings, and I've seen things where I've thought that may help or that may work, and I'll take the idea back. I've never in the five years I've been in there, I've never had anybody at ALEC say, 'here are the bills you need to file.'"

When asked about the high number of model ALEC bills introduced, Harkins said no coordination comes from ALEC. He credited, instead, the growing majority of Republicans first in the Senate, then in the House, leading to this year's supermajority.

"The fact that we have a large Republican majority of representation in the House and the Senate, and there are a lot of members in there, which is why Mississippi may (have a lot of ALEC bills)," Harkins said. "Over the last five years coming into the supermajority in the House and the Senate, you're actually able to get some legislation through."

Model policies are usually distinguishable by their introductions, but using some the University of Chicago study called the Legislative Influence Detector, or LID for short, finding almost word-for-word ALEC language in Mississippi bills that died and current laws is not difficult.

For example, ALEC's "Civic Literacy Act" model policy has appeared, except in 2012, in some slightly edited form, in introduced bills in Mississippi since 2008. The legislation is an attempt to require public schools to teach the Declaration of Independence, the Constitution and the Federalist Papers. The only change Mississippi lawmakers made over the years was to add the Emancipation Proclamation to the list of required reading for students.

During a legislative session, thousands of bills are introduced that die in committee, and while many ALEC model bills have similar "Civic Literacy" stories, other ALEC model legislation and bill language have passed through the Legislature recently.

In the summer of 2015, data scientists collaborating on the "Data Science for Good" project compiled a database of every piece of legislation introduced in state legislatures from 2010 to 2015 (for some states, data went back to 2008), collected by the Sunlight Foundation.

Both ALEC and ALICE highly influence Mississippi, LID data shows, although the former organization has much more influence due to increasing Republican control of the statehouse. ALEC is a nonprofit lawmaker membership organization dedicated to "limited government, free markets and federalism," its website states.

In an April interview, Molly Drenkard, ALEC's director of media relations, said that the primary purpose of ALEC is education. Lawmakers who are ALEC members can attend task-force meetings where they exchange ideas with lawmakers from other states, policy or think-tank groups, and members from the business community.

At task-force meetings, lawmakers draft model policies for discussion in the larger ALEC meetings, where those model policies are discussed, amended and voted on and approved by the ALEC board of directors. House Speaker Philip Gunn, who did not respond to interview requests in time for this story, is on that board. Every five years, the organization reviews its policies to see if it is time to update them.

Other research is consistent with LID's findings that more and more state legislation reflects model policies written by interest groups. Joshua Jansa, a researcher at the University of North Carolina, has studied the role interest groups play on policymaking. In his 2015 paper, "Interest Group Influence in Policy Diffusion Networks," Jansa looked at states' Stand Your Ground legislation modeled after ALEC's policy and anti-abortion policies developed by Americans United for Life. Jansa said copying legislation around specific issues from interest groups is an easy thing for lawmakers, especially those who don't have time or resources to write their own bills. Jansa said one of the biggest takeaways from his study was realizing the nationwide effect interest groups can have by writing policies themselves.

"Groups like ALEC are helping create a national agenda, since they're on the conservative side, for conservatives or for Republicans," Jansa told the Jackson Free Press.

"Republicans across the country, no matter where they are at can pull these bills off the shelf and introduce them and get the ball rolling in their state—and all of the red states start looking like each other."