Charlottesville and the Mississippi Flag 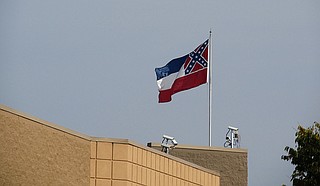 "The current state flag only perpetuates division and discord, rather than unity and understanding." Photo by Arielle Dreher.

As college professors, we have watched events of the past few days in Charlottesville and around the country while preparing for a new semester. We know that students in our classes will bring many questions and perspectives about this moment in history. They will look for us to comment on a response from the president that many Republicans and Democrats alike found deeply troubling and insufficient. They will wonder why many white nationalists and racist groups feel empowered at this moment in time. We have our work cut out for us.

In turn, we are also historians in and of the state of Mississippi, where white massive resistance to black advancement has been the norm for 200 years. It is now incumbent upon us to take the strongest of stands against the white supremacist establishment in this nation and in this state and put this recent wave of white nationalism in historical context.

With that in mind, it is long past time for the emblem identified with the Confederate States of America to be removed from the state flag of Mississippi. This flag does not reflect the entirety of the state’s history and people. It ignores the reality of the African American experience, and it limits the scope of what Mississippi has been, is and can be.

Historians have long held that the Civil War was fought for the right of southern states to maintain and expand the institution of slavery. In declaring their support for the Confederacy, Mississippi’s leaders clearly stated in the secession ordinance of 1860: “Our position is thoroughly identified with the institution of slavery—the greatest material interest of the world. ... A blow at slavery is a blow at commerce and civilization. That blow has been long aimed at the institution, and was at the point of reaching its consummation. There was no choice left us but submission to the mandates of abolition, or a dissolution of the Union, whose principles had been subverted to work out our ruin.” 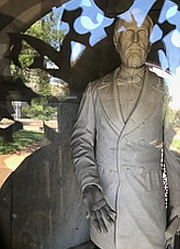 Not only that, the emblem connected with the Confederacy was not adopted for general use until 1894, meant to further demean African Americans after the 1890 state constitution implemented black disfranchisement. At the time, Mississippi was majority African American and, in the 1870s, had even had two black U.S. senators. When Barack Obama was elected to the U.S. Senate, he was only the fifth black U.S. senator in history.

With black disfranchisement, white supremacists in Mississippi quickly established their control of Jim Crow and social, political and economic power, and the rest of the South rewrote each state constitution to reflect what was called the “Mississippi Plan.” With the advent of lynching, those white leaders assured there would be little challenge to their authority.

In the Equal Justice Initiative’s third edition of “Lynching in America,” the initiative has recalculated the number of known lynchings, and Mississippi was number one per capita and number one in total: 654 from 1877 to 1950. For three quarters of a century, a lynching happened every six weeks, and those are just the “known” victims. Throughout the South, that number was 4,084 over those 73 years, or more than one lynching every week.

The threat of racist mob violence has been present throughout American history, and as seen by the flag-wielding neo-Nazis and racist sympathizers in Charlottesville, the use of Confederate emblems echoes the racist reasoning of whites in Mississippi at the end of the 19th Century, who used terror to impose minority rule.

In light of these facts, we object in the strongest possible terms to perpetuating a symbol of racial terror on a flag that is supposed to represent the people of Mississippi. The current state flag only perpetuates division and discord rather than unity and understanding. Emblems and flags matter. They signify what is important to a citizenry and cause us to reflect on our history.

We demand a flag that represents the entirety of our state’s history and all its people, and we are encouraged that some state leaders, both conservatives and progressives, have declared that it is time for the current flag to come down.

As historians, we by no means want to erase history. Quite the opposite. We believe it is important to remember these emblems and teach students about what they have represented to the people of our state over time. However, the appropriate historical context for the long-time state flag and Confederate emblem can be delineated in textbooks, museums and archives so the public can reflect upon it with the support of proper, historical interpretation.

This emblem does not belong on an official government flag that signifies the values of all the people of the state of Mississippi, nor does the emblem belong in public spaces that officially represent those people.

It is time to bring down that flag.