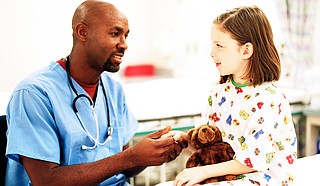 Mississippi children rely heavily on federal funding for their health care through Medicaid and Children's Health Insurance Program. A new study from Georgetown found that four Mississippi counties are in the top 10 rural counties in the country that rely most on Medicaid for children's health care. File Photo

JACKSON — A majority of Mississippi kids rely on Medicaid and the Children's Health Insurance Program for health care in the state. The Georgetown University Center for Children and Families analyzed Census data that show that more than 43 percent of children rely on government-funded health insurance in most counties.

Mississippi's Medicaid rolls back this up. Of the state's 712,500 Medicaid enrollees, more than 374,000 are kids. An additional 48,100 children receive CHIP, which is health insurance for kids from families that are not eligible for Medicaid but still receive income low enough to receive some assistance for health care.

Joan Alker, the executive director of the Georgetown Center for Children and Families, said the number of uninsured children has decreased nationally and in Mississippi in recent years, largely due to the Affordable Care Act's "welcome mat" effect.

How ‘Trumpcare’ Could Hurt Mississippians

The U.S. House of Representatives made good on President Donald Trump's campaign promise of repealing and replacing the Affordable Care Act last week, but the legislation could have dire impacts for Mississippi, a Republican leader says.

Now as Congress threatens to repeal the ACA, Alker worries about an opposite "unwelcome" effect. Both the House and the Senate's proposal to repeal the ACA include capping and block-granting the Medicaid program, she said. Caps mean that the state would have to foot the bill after all the federal funds are used up, Alker said, which could increase the cost for states in the case of potential health crises.

"Mississippi, which is a relatively poor state, has an enormous amount to lose in this," Alker told the Jackson Free Press.

Currently, Mississippi gets the best bang for its buck with Medicaid. Kaiser Family Foundation data show that 75 percent of Medicaid funds in Mississippi come from federal funds, while the state chips in 25 percent.

Rural counties, not just in the Mississippi Delta, around the state heavily rely on the Medicaid program to fund children's health care. A recent study from the Georgetown Center for Children and Families identified the 10 rural counties with the highest percentage of children on Medicaid—four of them are in Mississippi. More than 70 percent of children living in Jefferson Davis, Holmes, Covington and Leflore counties receive Medicaid.

Jefferson Davis County has the highest percentage of children receiving Medicaid in a rural county in the country at 82 percent. A Los Angeles Times map of the rural study found that 617 of the 780 counties in the U.S. where the majority of kids have Medicaid voted for Donald Trump in the 2016 election.

While several Mississippi Delta counties with high percentages of children on Medicaid voted Democratic in November, several Republican-leaning counties in rural parts of the state also rely on Medicaid for children's health care.

Only three counties in the whole state—Madison, Rankin and DeSoto—have less than 30 percent of their children on Medicaid or CHIP.