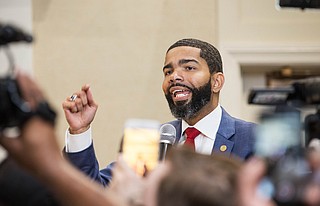 Chokwe Antar Lumumba likely claimed the Jackson mayor's seat, winning the Democratic primary by a landslide against other candidates, drawing more than twice the votes as the second-place candidate. Photo by Imani Khayyam.

"I say that because it is not about me. I say that because you defied conventional wisdom today," Lumumba boomed to his crowd of supporters just after 10 p.m. after leading the field of 10 candidates throughout the evening. "... Conventional wisdom said that Jackson could not come together, but we saw today in this election, we saw northeast Jackson agree with south Jackson, (and) southwest Jackson agree with northwest Jackson," Lumumba said.

Lumumba indeed delivered a resounding victory, taking 55.11 percent of the vote and his next closest challenger, state Sen. John Horhn, following with 21.21 percent. That win means the young attorney is likely to be the next mayor, even though he still has to defeat Republican nominee Jason Wells in the June 6 general election, which is typically perfunctory in such an overwhelmingly Democratic city.

The presumptive mayor, supported by national progressives including Bernie Sanders devotees and Democracy for America, did not mince words when it came to the need to increase prosperity throughout the city instead of in just parts of it. "We have two options," Lumumba told his crowd to loud cheers. "We have the option of economics by the people and for the people or economics by a few people for themselves. And so we're making the decision that we're going to have a solidarity economy that works for all of Jackson."

Lumumba called out members of his father's Taliaferro family from Michigan. (His father Chokwe Lumumba, the previous mayor who died in office in 2014, was first named Edwin Finley Taliaferro before he later changed it.)

"Today would have been the 96th birthday of my grandfather, the day his grandson wins the Democratic primary," Lumumba said. "So what we're going to do is broaden the ticket. We're going to make certain that we all work together, that we identify our collective interests. We're going to love each other."

Lumumba made the point that everyone in the city pays when one neighborhood struggles. "We're going to show support to south Jackson. Because we know that when the people in south Jackson aren't treated right, the tax burden will fall on the people in north Jackson," he said.

As primary night wore on, supporters waiting at Lumumba's watch party became increasingly adrenalized with the promise of a win as spirits dropped at most competitors' gatherings. At approximately 9:50 p.m., the crowd began cheering, blowing colorful noisemakers like it was New Year's Eve, and raising their fists to the sky as the candidate's sister Rukia Lumumba led the chant, "One City, One Aim."

Rukia Lumumba, sister of Chokwe Antar Lumumba, spoke passionately to the many supporters who gathered in the King Edward Hotel. Supporters chanted "One City, One Aim, One Destiny."

Rukia Lumumba, who moved back to Jackson from New York City in time to help lead her brother's 2017 campaign, did not need a microphone as her strong and passionate voice filled the room. "It is an honor. It is a pleasure, to stand in this room with you tonight," she told the crowd. "But most importantly as I stand here, it is an honor and a pleasure to be the sister of this great human being. He stood up after our father passed to continue that vision. A vision that was a selfless vision. A vision to unite a city."

Mayor Tony Yarber, who only drew 5.39 percent of the vote in his re-election bid, conceded at his subdued watch party at the Next Level nightclub. "The city will gain an advocate that will have something to say without giving a damn," Yarber told the Jackson Free Press and WLBT while sitting next to his wife, Rosalind.

The mayor later officially conceded, offering full support to presumptive Mayor Lumumba and continuing devotion to the city. "This isn't a loss for us ... you move forward," he said.

Both Ronnie Crudup Jr., a political newcomer who took 2.34 percent of the vote in fifth place, Crudup and his wife, Andre'a Crudup, showed a positive attitude and good vibes while watching results with their family and supporters all evening at the New Horizon Center.

However, Hinds County Supervisor Robert Graham, who hosted his watch party at Eddie's Soul Food on Bailey Avenue, left supporters standing outside waiting impatiently for him to arrive. The flustered Graham supporters did not allow the press to take any photos of them. He took 15.2 percent of the vote, coming in third.

Horhn, who came in second, posted a gracious message on his Facebook page late on primary night: "It's been a great day, and a great competitive season. I wish to compliment each of my competitors on their respective campaigns. The dialogue has been excellent, the interaction lively and robust, and the relationships between us all respectful and productive."

"Each of the men running in the Democratic primary are good men, each with significant skills and true passion. Going forward, let's keep the momentum. ... I look forward to the opportunity for us all to work together for the benefit of each of our supporters. Because, when we remove the part that says; "I'm for candidate X, Y or Z," we then get to the part that says; "I'm for JACKSON." So, let's all be for JACKSON tomorrow morning," Horhn added.

A 'Miracle' in the Primary

Conventional wisdom, and recent polls, predicted that Lumumba would take around 30 percent and then face one of two older candidates in the runoff—Horhn or Hinds County Supervisor Robert Graham. But Lumumba had predicted on social media throughout the day that he would top the margin needed to escape a run-off: 50-percent plus one vote.

Turnout in the Jackson Democratic primary election was typically low but similar to recent years, with 33,839 Jacksonians casting ballots in the Democratic primary, and 34,169 Jacksonians voting in total. The much less popular Republican primary brought in 330 total votes for mayor. Jason Wells won the Republican mayoral primary election on Tuesday night with 174 total votes.

Few people—save Lumumba and his supporters—seemed to believe that a candidate winning a majority with predicted low turnout and nine candidates was possible. Secretary of State Delbert Hosemann predicted low turnout in statewide municipal elections, telling reporters Tuesday morning that the Jackson Democratic primary would more than likely go to a run-off. He said it would be a "miracle" if someone managed to take home 50 percent of the vote plus one.

Lumumba pulled off more than a miracle and then some, in that case.

The Jackson City Clerk's staff counted ballots in the basement of the Hinds County Courthouse with the assistance of the Hinds County Clerk's office last night. Initial returns showed Lumumba out ahead of other candidates, first over 50 percent with Graham in second place, then dropping under when Horhn pulled ahead of Graham. Yarber, however, clearly was out of the running even with a third of precincts' votes counted. He conceded the race around 8:30 p.m., endorsing Lumumba.

By about 9:30 p.m. more than 80 percent of the precincts' votes were in, and Lumumba had a sizeable lead at 54 percent of the total votes. Sen. Horhn conceded the race around this time.

Then the vote-counting halted after a technical glitch in the basement of the Hinds County Courthouse. Clerks needed access to a machine to download votes from one of the flash drives, which did not work at first, but the room where the machine they needed was—was locked. By 10 p.m. clerks and election-commission staff were able to download the rest of the votes and report the final results.

Lumumba ended the night with more than 55 percent of the total votes cast in the election, garnering 18,617 votes. Horhn, in second place, drew 21.21 percent of total votes. The results on election night included absentee ballots cast before the election but excluded affidavit ballots cast at the polls when a person went to the wrong precinct. Clerk staffers said that while there were several affidavit ballots to be counted on Wednesday, there were not enough to change the results and edge Lumumba out of winning a majority.

The presumptive mayor came close to winning the emergency mayoral run-off election back in 2014, after his father unexpectedly died. Mayor Tony Yarber and Lumumba emerged from the primary election with each candidate winning 31 percent of the vote. Yarber then took 54 percent in the 2014 runoff to defeat Lumumba then.

The Ward 6 council race will go to a run-off in two weeks between Aaron Banks, a Yarber campaign staffer in 2014 who received 32 percent of the votes, and Ernest Slaughter, who received 23 percent of the votes. Banks or Slaughter will replace Council President Tyrone Hendrix, who retired to take a job with the Mississippi Association of Educators. Republican Ward 1 Councilman Ashby Foote faces independent William "Bill" Jordan in the general election, but no Democratic challenger.

CORRECTION: This article originally said Lumumba is 33. He is 34.