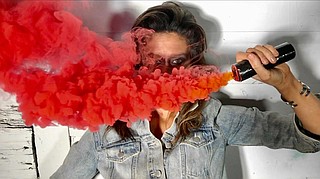 The Americana realm will be well represented in this year's Stray At Home Art & Music Festival on May 13. The music lineup features nationally known singer-songwriters Marc Scibilia, Joe Pug and Zach Williams of the Lone Bellow, as well as local bluegrass band the Delta Mountain Boys.

One performer, however, is heading in a new direction with her latest release.

Many fans first discovered singer-songwriter Grace Askew of Memphis, Tenn., on NBC's "The Voice" in 2013, but viewers got a watered-down version of her as an artist, she says. Her upcoming EP, "Warrior," which is scheduled for release in early 2018, sees her entering a more experimental phase. She released the title track as a single on April 28.

"I've been in this Americana, throwback, old-school kind of sound for a while, and I just found myself feeling stagnant and feeling kind of stunted creatively," Askew says. "So I just chose to throw myself into this current sound because it's kind of scary, and it's unfamiliar, but it's so reviving."

"Warrior" is the follow-up to her 2014 full-length "Scaredy Cat," which she recorded at Memphis' legendary Sun Studio. She spent the last three years developing the songs that will appear on "Warrior," but by the time she was ready to record, finding the right studio and producer to complete her vision was its own challenge.

"It really was kind of a disheartening process in the beginning because I was going from (a) studio to a producer to a producer at another studio, just trying all these different ways," she says. "I felt lost really lost for about a year, and I thought, 'Oh my God, I'm going to have to make music a hobby; I'm going to have to get a real job and give up,' because it was such a struggle to find out what the right next step would be."

Then, she met producers Elliot Ives and Scott Hardin, and the trio decided to make the EP together at Young Avenue Sound in Memphis. With Ives' background as a guitarist for Justin Timberlake and Hardin's work engineering artists such as Saliva and Saving Abel, they may not seem like an obvious choice for Askew. But a curiosity to find out what sound they would create together made them more interested in teaming up, she says.

Ives and Hardin brought more electronic elements and energy, which Askew says lined up perfectly with the style that she was aiming for. That direction may not be a hit with all of her fans, she says, but it is the right choice for her creatively.

"I want to have an album that just makes you feel empowered and dance and just have fun with yourself," she says. "Really, that's what I've always wanted to create: freaking pump-up-your-system-in-the-morning kind of music. But I'd never really dealt with that. It was always, 'Mic up an amp and then get going.'

"So to have these beats on it, I'm probably going to shock some people, and I may lose some fans. But I don't care because I was so happy with the process. Every artist should be a little selfish in that sense, you know?"

Grace Askew performs at the Stray At Home Art & Music Festival, on Saturday, May 13, from 11 a.m. to 7 p.m. at Smith Park (302 E. Amite St.). Admission is free. For more information, visit strayathome.com.