The Future of Fleet Foxes 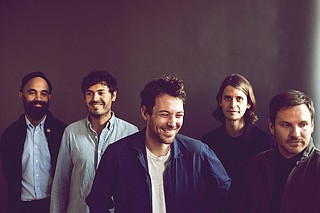 When a band ends a six-year hiatus, there are bound to be high expectations for the new music that breaks the silence. For Robin Pecknold, principal songwriter of Seattle indie-folk group Fleet Foxes, that expectation came from himself for the most part.

"I think part of the reason it took so long to make was because it felt like it needed to do a lot of things at once, or I thought it did, you know?" Pecknold says. "Because it had been so long of a gap, I didn't want to come back with something completely different."

Working on Fleet Foxes' latest full-length, "Crack-Up," certainly felt like making a third record, he says. The songs had to touch on places that the band went on its previous two albums—the 2008 self-titled and its Grammy Award-nominated follow-up, 2011's "Helplessness Blues."

More importantly, Pecknold says, it had to do that in a fresh way. This was a revitalized Fleet Foxes, after all.

"Crack-Up" hit shelves in June 2017, more than six years after "Helplessness Blues." For fans, it felt like he simply disappeared, but Pecknold says he continued writing and playing music outside the Fleet Foxes realm, including touring solo and writing the score for the off-Broadway play "Wyoming." During that span, he also attended the Columbia University School of General Studies in New York City.

"I worked on music the whole time, but I had all this other stuff I wanted to do," he says. "... It seemed like everyone else involved was kind of in the right spot to be working on (a new Fleet Foxes record), or had done their own projects and were ready to do this again. It just seemed like the timing was right. In a way, it hadn't been for a while. ... Had it happened sooner, I would've wanted to go for it a little sooner, you know? Looking back, I wish it hadn't been such a long gap."

A lot of good came from that six-year space for the band's other musicians, though. Skyler Skjelset toured as the supporting act for dream-pop band Beach House; Christian Wargo put out music under the name Poor Moon and revived his previous band, Crystal Skulls; Casey Wescott served as a studio musician on many projects; and Morgan Henderson joined folk band The Cave Singers. The band's former drummer, Josh Tillman, quit shortly after the "Helplessness Blues" tour and established his solo career as Father John Misty.

Don't expect as long of a wait for the next entry in Fleet Foxes' catalog, though.

"Now, it's been six or eight months or whatever, and we're working on songs for another album," Pecknold says. "It's fun to be working on something that feels different even from ('Crack-Up'). It feels more like a debut album or something."

One of the differences on the next album may not be as obvious to listeners. Whereas he focused mainly on chords and melody for the band's other releases, Pecknold says that, on "Crack-Up," he put more thought into what those chords and melodies represented, as well as the visual images they could create.

"That mostly grew out of listening to the songs so much and having visual pictures come to mind or having seen something and thinking, 'Well, what would that sound like?'—just having a different way of thinking about what music is doing," he says. "But it's tough because those things don't always translate. Unless you get the opportunity to explain it, it's very hard to kind of (communicate). It's the same thing like layers of meaning in a painting or like a movie. There are certain things where, if they're not explained to you, then they're not totally obvious."

With the upcoming music, the lyrics tend to speak more clearly and in terms of what things are on the surface, which is a challenge in itself, he says. "Crack-Up" may be his favorite Fleet Foxes album because of how personal it became to him, but he doesn't expect to imbue other projects with as much hidden meaning again.

"It's like if you have to explain a joke, then it's no longer funny, you know?" Pecknold says.

Fleet Foxes will stop in Jackson on March 9 as part of their international tour, which lines up with the 10th anniversary of the band's self-titled debut. It's a milestone that Pecknold says feels a long time coming and like no time has passed at all.

"I remember, when I was a teenager, thinking, 'You only need to do one thing for 10 years to get as good at it as you're going to be, and then you can move on to something different,'" he says. "I think that's part of why I'm working on the (next) album, even though it's a Fleet Foxes album, as kind of like a debut. It's going to feel pretty different."