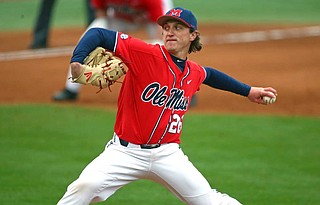 The University of Mississippi used a strong start from freshman pitcher Doug Nikhazy to facilitate a sweep over the University of Florida over the past weekend. Nikhazy started game one of the three-game series, and his pitching effort set the tone.

In six innings, he scattered seven hits and surrendered just one walk as the Rebels pounded the Gators for a 16-4 win. The left-handed pitcher struck out six players and gave up just a single earned run.

His efforts against the Gators earned him SEC Freshman of the Week honors. This is the first time in his career that the conference has honored him.

It marked the third-straight game the Rebels have won in SEC play, with Nikhazy getting the start on the mound. He earned his first SEC win with a season-high seven innings pitched against the University of Missouri.

Against the Tigers, he gave up just two hits with three strikeouts and allowed two walks as the Rebels earned a 2-0 win. It was the only win of the series for UM, as Missouri took the opening and closing games.

The Windermere, Fla., native earned his second SEC win against the University of Arkansas. He pitched five-and-two-thirds innings while giving up striking out six, allowing five hits, walking six batters and giving up three earned runs in the Rebels' 4-3 win.

Nikhazy's first college win came in the opening of a Saturday, March 2, double-header against in a 7-6 victory over Long Beach State University. He pitched just one-and-two-thirds innings as the Rebels came back to win.

On Wednesday, March 6, he took his first collegiate loss against the East Carolina University. He gave up up five hits, three earned runs with seven strikeouts and one walk in the Rebels' 2-3 loss to the Pirates.

He took his second loss of the season against the University of Alabama in just the second game of SEC play for UM. The pitcher made just an inning appearance but gave up an earned run and a hit while striking out two in his brief stint; however, he ended up taking the loss in the Rebels' 6-8 defeat.

This season, Nikhazy has made 11 appearance with six starts, and has a 3-2 record as starting pitcher and earned one save. He has a 2.95 ERA with a team-high 35 strikeouts. In 36.2 innings of work, the left-hander has allowed 32 hits, 15 walks, 12 earned runs, 12 runs, seven doubles and given up four home runs.