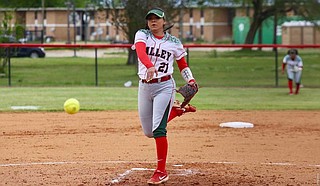 MVSU pitcher Alyssa Montes earned two of the team's five wins last week when she helped the Devilettes win against the University of Louisiana-Monroe and Alabama A&M University.

Montes pitched 2.2 innings against the Warhawks, helping MVSU earn a comeback win. She held ULM hitless and scoreless while surrendering just one walk during her time on the mound. Her teammates rallied from an 8-2 deficit to a 9-8 victory.

The San Antonio, Texas, native pitched a gem against Alabama A&M. She pitched a complete game while allowing just three hits and one run over seven innings' work. Montes struck out three batters and did not issue a walk in the 3-1 MVSU victory.

Montes' effort earned her SWAC Pitcher of the Week. The two victories upped her win total to five on the season. Her 101 innings pitched are the second most in the SWAC, and she leads the team in that statistic.

Montes dropped her first four games of the season before earning her first win in February against Grambling State University. She pitched a complete game, earning the win as MVSU took down GSU 10-6.

She earned her second win of the season in a complete game against the University of Arkansas-Pine Bluff in early March. Montes pitched the Devilettes to a 7-3 win, as she gave up just one walk and struck out three batters.

Her third victory came in a relief appearance against the Mississippi University for Women. She struck out batters in 4.2 innings of work and allowed just one run in the team's 9-5 victory.

Next up for Montes and MVSU is a three-game series at Jackson State. The Devilettes start the series on Friday, April 26, at 5 p.m. and play a double-header on Saturday, April 27, with game one starting at noon and game two starting at 2 p.m.