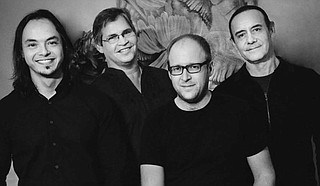 Jackson has grown to be a city known for its local music scene. From metal to blues to rock 'n' roll, the diversity of Jackson's music remains prevalent. This chord rings true with the Latin jazz and Brazilian flamenco sounds of the Jackson Gypsies.

The band hails from serendipitous origins. Calabrese's wife, Anastasia Holobinko, had moved to the Jackson area after obtaining her doctorate and acquiring a job at a crime lab in Pearl. Calabrese, still living in Cleveland, Ohio, at the time, was already a musician. One time when Calabrese was coming to Jackson to visit, Holoblinko reached out to Gonzalez after a referral from some friends because she was looking for a percussionist to play with her husband.

Calabrese and Gonzalez discussed the possibility of starting a band together with a focus on Latin and flamenco styles of music. Already rooted in the Jackson music scene, Gonzales reached out to guitarists Leo and Rick Moreira (unrelated), both of whom he knew had an interest in the genres.

"So we got together at my house. Rick is from Honduras. Leo is from Brazil. Carlos is from Argentina via Ohio. And as soon as we started playing, we said, 'I think we have something here,'" Gonzalez says.

Dubbing themselves the Jackson Gypsies in 2017, the foursome began playing gigs at venues like Hal & Mal's, Kathryn's and Pelican Cove Grill.

After playing together for about a year, the band sought out a musician who could add bass to their ensemble, which led them to McNaughton, who had already been studying Latin music at the time.

"It helps the percussion to have a bass player, because now you have a solid foundation," Gonzalez says. "I call drums and percussions the bones, and the bass is like the cartilage, and the two guitars are the heart and the blood pumping. Then you got something really cool."

Scheduling conflicts led to Rick Moreira having to leave the group, but the four remaining members continued performing, gaining fans along the way.

During performances, the band presents renditions of popular songs, arranged to give them a little "Latin seasoning," Gonzalez says, so that the songs still reflect the flamenco-pop stylings of the band.

"As time goes by and as the band matures, we make adjustments to our repertoire so that the crowd doesn't get lost in our show," Leo Moreira says. "Because we do play a lot of songs that are not recognizable, especially the Latin American tunes, we try to mix them with American tunes that are very much recognizable so that the crowd stays engaged."

The group also performs original songs, which Calabrese primarily composes, including "Dance with Me" and "Gypsy in My Soul."

While the band's sound may be a little niche, the group has found reception from audience members to be overwhelmingly positive.

"The reception at the very beginning was great," Calabrese says. "The people who happened to just drop in would just stare and smile, and it's one of these things where after we were done playing, they'd come up and say, 'We have never heard anything like this before, and we are fans, and we are now, and we're going to be telling some people (about the Jackson Gypsies) because this is completely different. It's fresh.'"

McNaughton attributes some of the fan response from the fact that the group is mostly acoustic.

"People love it. It's not too loud, so that always makes it comfortable for people to just hang out and have a good time," he says. "Some bands you go out to see them and they're super loud, but being a mostly acoustic group, we don't have that issue. People like it because it is so energetic."

While the audiences they have played for have given the Jackson Gypsies positive feedback, because their music is a little niche, they do sometimes have trouble booking gigs.

"Not all places are open to Latin American music," Moreira says. "We still feel like there is still resistance to other cultures (being musically represented) in some places, although not from everybody."

Nevertheless, the Jackson Gypsies continue to liven various stages with their upbeat sets. Besides the group's gig at Hal & Mal's on Saturday, Aug. 3, the band is scheduled to perform at other bars, restaurants and concert festivals in the upcoming future, including a performance at Lakeshore Park in Brandon on Sept. 26 as part of the 2019 Summer Concert Series and one at WellsFest 2019 on Sept. 28.

In addition to performing, the band is looking into studios so that they can begin recording their music, particularly their originals, so that people can listen to their distinct blend of the Latin and flamenco styles through digital means.

To learn more about the Jackson Gypsies, find them on Facebook at @jgpysiesmusic or look for them at the JFP music listings page at jfp.ms/musiclistings.