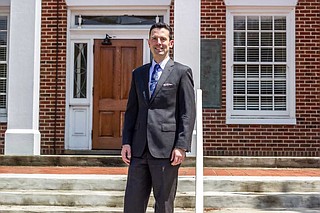 Jackson graduated from Mississippi College in 2001 with a bachelor's degree in pre-medicine.

In his third-year rotation during medical school at the University of Mississippi, he first encountered the field of psychiatry.

"Basically, you sat down with patients, and if you talked to them long enough, they basically told you what was wrong with them or what needed to be treated or how they needed help," he says. "I just felt like that was actually what I admired most about Dr. Lewis, and it just seemed like a natural progression to pursue that entirely because that was what I really admired was taking that level of time with patients and getting to know them to that degree. (Psychiatry) just felt like a better fit."

"It's something that a lot of folks get mixed up," he says. "It's a common misconception that the terms of interchangeable."

One thing he is passionate about is helping stop brain drain in Mississippi. "When I was really young, I remember my dad telling me in order to keep Mississippi going and doing well and succeeding, we needed to a better job of keeping our own folks here," Jackson says.

He saw people from high school move out of Mississippi and do great things, but never came back, he says, so he has made a point of going to school and working in the state. "I never had any intentions of leaving because I felt like (I had) some duty or sense of duty to the population of Mississippi," he says.