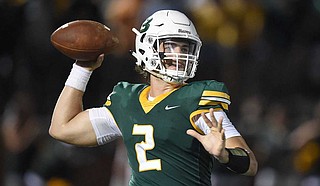 McEachern began his career at Belhaven in 2016, when he played in 10 games and led the Blazers offense. He threw for 3,722 yards with 31 touchdowns and 22 interceptions and completed 58.7 percent of his passes. He added 144 rushing yards with three touchdowns.

During his first year as a Blazer, he set a school single-season records for completions, attempts and touchdowns. Belhaven made McEachern its nominee for the 2016 C Spire Conerly Trophy.

Even with the impressive numbers, the Blazers finished the season with a 2-8 overall record and a 1-6 record in conference play.

The Keller, Texas, native followed it up with 2,769 yards and a 61.2-percent pass-completion rate with 27 touchdowns and 11 interceptions. McEachern finished the season with minus-41 rushing yards and one touchdown while seeing action in eight games.

In 2018, McEachern finished with a strong numbers in the passing game, but Belhaven did not enjoy a strong season on the field. The Blazers finished the season with a 2-8 overall record and a 1-8 in the American Southwest Conference.

McEachern played in 10 games in the 2018 season. He finished the year with 1,324 yards, eight touchdowns and six interceptions. The quarterback completed a career-low 51.3 percent of passes. He added 93 yards rushing with a touchdown.

Belhaven struggled on the field just like its quarterback did for the 2018 season. The Blazers finished the season with another 2-8 overall record and 2-7 conference record.

In his three seasons, McEachern has thrown for 7,815 yards, 697 completions, 1,199 pass attempts, 66 touchdowns, 39 interceptions and a pass-completion rate of 57 percent. In a successful season, the quarterback could own all the school records for passing.

McEachern lettered for three seasons at Keller High School in Texas. He spent one season at the University of Texas at El Paso before transferring to Belhaven.

Belhaven opens the 2019 season against rival Millsaps College. The Riverside Rumble is set to kickoff at 7 p.m. on Thursday, Sept. 5.