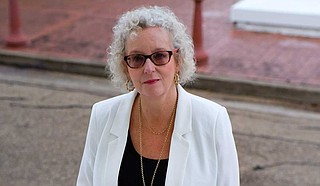 After the City of Jackson's announcement last week that officials are suspending the recycling program, Ward 7 Councilwoman and Jackson City Council President Virgi Lindsay called for a Ward 7 town hall meeting, which was at Belhaven University on Aug. 15. Photo by Delreco Harris

JACKSON—The City of Jackson may be ending the recycling program, but the capital city is promising to repair more streets and sidewalks in Jackson.

Council President Virgi Lindsay of Ward 7 called a town-hall meeting for Aug. 15 after the City of Jackson announced in a press release on Aug. 13 that it is suspending its recycling program, as the market demand for recycled products has diminished in recent months. Lindsay also saw it as a way to inform residents about a new street repaving program.

"So yes, there's some bad news, but there is some good news," she said.

Mayor Chokwe A. Lumumba kicked the meeting off. He said the City of Jackson has become an intentional administration.

Moving Past 'Cycle of Humiliation'?

Fixing more of the city's roads is one way the mayor promises to move ahead.

"We have been able to have the 1% (sales-tax commission) agree to endorse our plan where we are leveraging $40 million to put toward street resurfacing. That is the largest allocation towards street resurfacing that this city has ever seen," he said.

While the City of Jackson collects $13 million annually from the 1% sales tax and leverages the $40 million for the repavement project, it still saves $9 million a year even when paying off debt for pay-as-you-go projects, Lumumba said.

"This allows us the opportunity to change our crumbling infrastructure into an economic frontier. What we need to do is create an inflection point that takes us from this cycle of humiliation that our city has been suffering from for far too long," he said.

Charles Williams, city engineer, said the Department of Public Works has not designated any streets for the repaving project; however, he encouraged residents to send the names of any streets they want repaved to their council members.

"The hard part is trying to prioritize streets when they're all in the same condition," he said.

Public Works is trying to think outside the box and find new solutions, such as looking at better materials and milling (removing part of the surface of a paved area) the streets, Williams said.

"We're trying to apply the milling process and get all the old asphalt off, we're trying to repair curves so we can have proper drainage, and then we're trying to put the asphalt back and use a good mix to do that. We have to have roads that lasts more than three years," Williams said.

On Aug. 19, Public Works, with help from Jim Stewart of Southern Consultants Inc., will begin repaving Northside Drive from State Street to Interstate 55, he said. Williams said the city council also approved a contract with Hemphill Construction Company to repave State Street from Fortification Street to Woodrow Wilson Avenue, which should start in October. He said they will also repair the Woodrow Wilson Mill Street Bridge and Military Road Bridge.

"We have to continue to pave. We're at the point where we can't afford to skip a year or two. We have to do a repavement program every year," Williams said.

The department is also looking to get some residential streets repaved, though they want to focus on arterial, or urban, streets with high traffic volume, he said.

'It Was Ending Up in a Landfill'

"Have you ever bought somebody a present only to find out that they threw it in the trash can?" Public Works Director Robert Miller asked the audience at the town hall. "That gift represented a sacrifice on our part, and we gave it to them with good intention that they would use it."

That's how he felt when he found out that parts of the U.S. weren't recycling, instead storing recycled products in a warehouse until prices increase or putting it in landfills, he said.

Last year, China cut back on imports of trash due to plastic being contaminated, making it expensive and hard to recycle. Some plastic also came into the country without a permit.

He said giving money to a large corporation for collecting recycled materials and getting no value out of it offended his sensibilities. Last year, he recommended suspending the program for a short term and redeploying the funds to cleaning up dump sites, he said.

"What I want to do is take the financial resources that I spent on recycling and spend it in an area where I know I can create value, and that is cleaning up more than 100 illegal dump sites in the city of Jackson," Miller said.

Miller said they have identified the dump sites and have taken measures to clean them, but people have already dumped in them again.

"Anybody that believes they are going to get away with it is mistaken," he said.

After the City of Jackson cleans the dump sites, he wants to put the recycling program back in commission, but the City will have to take a different approach to how it engages a contract for recycling, he said.

Miller is also looking into making neighborhood drop-off points at grocery stores but does not have that set up yet, he said. He emphasized the importance of putting recycling back in schools and creating a demand for recycling.

Miller also added this statement in the later email to the Jackson Free Press: "Stewardship of resources is of critical importance to our citizens: this includes our financial resources as well as our recyclable resources. We suspended our recycling program because the City of Jackson simply could no longer afford the continued cost of the recycling program as it had been established under the current contract with Waste Management of Mississippi, Inc. We are working to build a new recycling program that will achieve the objectives for managing recyclable resources at a cost that is affordable within our financial resources."