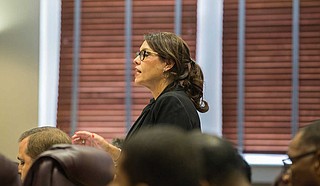 Commission on School Accreditation Chief Accountability Officer Paula Vanderford said if the state board accepts their recommendation to eliminate the U.S. history end-of-course exam, the decision will go into effect for the 2020-2021 school year. Photo by Imani Khayyam

JACKSON—Some Mississippi social-studies teachers see the State-mandated high school U.S. history exam as a "double-edged sword," bestowing importance on a discipline they believe does not get enough respect, but also burdening teachers and students with yet another standardized test.

"We feel that the only thing that makes social studies significant or looked at as being important is the fact that it is tested," said John Mistilis, a U.S. history teacher at Oxford High School. "Our fear is if the test goes away, then the importance of social studies will eventually go away."

But not many social-studies teachers are fans of the test, he said. When a task force from the Mississippi Department of Education voted on the issue recently, he chose to recommend doing away with the test as part of a 9-2 majority.

At a Commission on School Accreditation meeting at MDE headquarters in Jackson on Aug. 19, Mistillis said he wants to get rid of all state tests. Mississippi requires English II, Algebra I and biology tests—subjects that are also on the ACT, he noted.

"Why doesn't the State of Mississippi get out of this ignorant past," he said. "If we want to be forward-thinking, why don't we save the taxpayers money, have the ACT score for every single school, completely take care of all three of those guidelines, make everyone take the same test, and do it once a year and then have the rest of our time to have better instruction for our students?"

Mistilis said he wants what is best for his students, and he does not need a State-mandated test to know that they are learning U.S. history.

Teachers: Too Much Testing

After surveying teachers, the Mississippi Student Testing Task Force determined that teachers in the state think there is too much testing; the tests cause too much stress on students; and that some of the tests are not giving actual data to the teachers, Clinton Public Schools Superintendent Tim Martin said at the Commission on School Accreditation meeting on Aug. 19.

"Teachers were very appreciative across the state for the opportunity to share their perspectives," Martin said.

He said the task force has been working since June 2018 to determine the types, quantities, and amount of testing students take on the state and district level; provide recommendations on ways to ensure student testing measures the learning goals Mississippi teachers create; and discover and recommend best practices for student testing on the state and district level.

"Part of the job of the task force was not just looking at state tests, but the benchmark testing and things the district uses to get ready for the state test. Teachers look at that as one in the same, and it's taking time away from instruction to give a standardized test of some type. We wanted to look at both of those," Martin said.

The task force worked with Mississippi State University to conduct a web-based survey for every teacher in the state to get their input on state testing, he said. The task force sent links to superintendents, who in turn sent the link to the teachers.

"That process likely impacted the response rate because some teachers did not complete the survey, maybe thinking it would be tracked back to them, though that was not true," Martin said.

He said the overall response rate was 32%, which equaled 10,000 teachers across the state. "Teachers were very appreciative across the state for the opportunity to share their perspectives," Martin said.

State Board to Decide on Recommendation

The task force thought their work was done in March 2019, and they were going to come up with recommendations for districts on how many benchmarks are needed, Martin said. However, they realized their work was not done after reassessing the teacher's comments and their survey results.

The task members felt that it was important to hear from teachers once again, so they did a final poll to determine if the State should continue to give the U.S. history state exam, he said. Martin said the task force sent the poll to all high school teachers in the state, and 73% of U.S. history teachers said the test should be eliminated.

"The task force did their own poll of the members on the task force, and there was a 9-2 vote to bring the recommendation to the commission to do away with the U.S. History test," he said.

The commission unanimously voted to accept the task force's recommendation to eliminate the history test. "The test will continue to be administered for the 2019-2020 school year. This consideration would be effective for the 2020-2021 school year," Paula Vanderford, the commission's chief accountability officer, said.

The decision will not go into effect until the following year because the test is also tied to a graduation requirement, and it is in the rules of the Department of Education's assessment and accountability systems, Vanderford said.

"There's a number of policy decisions that have to be made," she said.

The commission will present its vote at the September Mississippi Board of Education meeting for consideration, and the board can affect or reject the recommendation, Vanderford said.

"We will ask the board to accept the recommendation to begin the Administrative Procedures Act process, which will allow the public to comment regarding the continuation of the assessment," she said.

If the board rejects the recommendation, Vanderford said the loop is closed regarding the issue of state testing.