Local Entertainment With a Dash of Giving Back 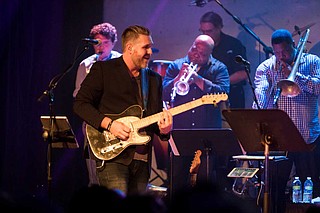 Topher Brown was one of the past performers at Covered. The next event is Aug. 28-29 at Duling Hall in Fondren. Photo by Mark Reed

Covered gives Jackson-based bands the chance to gain exposure while also letting Jacksonians contribute to a good cause.

"I was trying to determine what could we do from ... the church's perspective to give back to the community," he says.

After leaving the church's ministry in 2015, Watts continued this event through the support of his Jackson-based technology company Fuse.Cloud, where he serves as founder and chief executive officer.

During Fondren Covered, local  artists sing popular songs from other artists, and attendees can donate to a local nonprofit.

"The benefit (of the event) is twofold. Not only do people get to come to a really, really good environment for good music, hear some of the best Jackson players play, and hear music that they know and love, but also they get to learn about really good causes around the community and get  involved in that way," he says.

The event, which the organizers shortened to just "Covered," takes place twice a year at Duling Hall in Fondren.

Harkins has owned Fondren Guitars in Fondren for 13 years. He has been playing guitar for about 24 years. Watts invited him to play in the house band every event since the first performance in 2012.

"When Gary called me and asked me to be a part of this, ... I was thrilled and honored, and from the first time I ever did it, I was just blown away by what a fun time it was and how much good music we were able to create together and all for a good cause," he says.

Guest artists also bring their own styles of music. This year will feature Mississippi native Skylar Lane, who got fifth place on the 11th season of  "American Idol."

During this month's Covered, the artists will cover many songs of those who were born in Mississippi, including Elvis Presley, Faith Hill, Jimmy Buffet,  Conway Twitty, Britney Spears, Sam Cooke,  Dorothy Moore and more.

The event will benefit developmental center The Little Lighthouse.  Phil and Marcia Mitchell founded the organization in Tulsa, Okla., in 1972, and opened a location in Jackson, Miss., in January 2006. The tuition-free school serves students with special needs  between the ages of 6 weeks and 6 years old, the organization's website says. It also provides support groups, seminars and training sessions for the parents.

"Our parents don't pay anything, and it costs us about $17,000 a year per child to provide the services, so every  dollar raised or donated goes directly into  providing the early-intervention services for the kids," says Fran Patterson, the  director at The Little Lighthouse.