OPINION: Put Your Thoughts and Prayers Into Common-Sense Gun Legislation 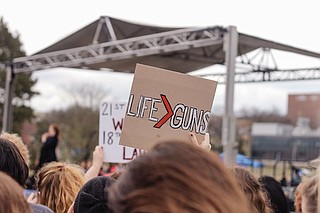 "I'm starting to become convinced that the American public has seen so much bloodshed and carnage through mass shootings. ... We need to wake the hell up and move up immediately with a common-sense gun control legislation to protect the American people." Photo by Annie Bolin on Unsplash.com

Many lawmakers in this country on the local, state and federal levels have been slow to speak about guns. Even though there have been many mass shootings in the U.S., many lawmakers have offered their thoughts and prayers; however, there has been no action on this issue.

Why? I guess the conscience of our lawmakers hasn't clicked or hit their families or communities yet to come to the realization that we need to do something about guns in this country.

But now after watching what amounts to political pomp in recent days, I have to say something.

In the last two weeks, two mass shootings in our country happened within 24 hours. The first shooting happened at a Walmart in El Paso, Texas, where the murderer was supposedly looking for Mexicans to kill. In this mass shooting, there were 22 people killed and more than two dozen injured. The second shooting happened at the Dublin Pub in Dayton, Ohio, where the assailant killed nine people and injured 27. Let that sink in. Let it marinate. So many lives were lost, and others changed irreparably and forever.

Why isn't our Congress listening to the pleas of the people begging them to act on gun control? Regardless of whatever you choose to believe, the facts are plain and obvious: This kind of firepower should not be legal on the streets of the U.S.

We all know this. It's common sense!

The entire country is in a precarious situation right now. Both literal and proverbial shots have been fired, and these bullets are ripping through the fabric of our democracy.

What does it mean when lawmakers are too weak to do what's necessary to save the lives of the country's citizens? The fact that lawmakers would not end their vacation and return to Washington, D.C., to move forward with gun control legislation shows a lot to the American people.

Other countries have taken massive leaps and bounds to do what they can to stamp out the blight of gun violence. The UK and Australia took drastic steps and measures to protect the lives of their citizens from increasing gun violence.

So why can't the U.S. get it together when it comes to gun control?

Why won't we realize that there's nothing more important than us? You, me, our families, our neighbors, our fellow citizens in this country. We are the most important part of this nation, and we are allowing ourselves to be victims because we have yet to make our voices so loud that our political leaders can no longer ignore us.

The United States is ready for change. But if we sit back and just wait, we will never get anywhere. Don't let anyone go through what you went through. I'm starting to become convinced that the American public has seen so much bloodshed and carnage through mass shootings such as Columbine, Sandy Hook, Virginia Tech, San Bernardino, the Pulse nightclub and the Charleston, S.C., church shooting, just to name a few, that we are numb to it now. We need to wake the hell up and move up immediately with a common-sense gun control legislation to protect the American people.

How can we stand as leaders before the world to show them a better way through democracy and freedom, if our citizens are suffering?

It's that simple. If we want to keep America great, then we have to continue to show empathy and concern for our citizens. We must continue to engage our political leaders and demand change. We must tell them that we are not OK with what we see.

I am reminded of Apostle James, who said that "faith without works is dead." It is time for lawmakers in this country to get to work to pass a common-sense gun legislation.

Duvalier Malone is the author of "Those Who Give A Damn: A Manual for Making a Difference," a motivational speaker, community activist and the CEO of Duvalier Malone Enterprises, a global consulting firm. He lives in Washington, D.C.