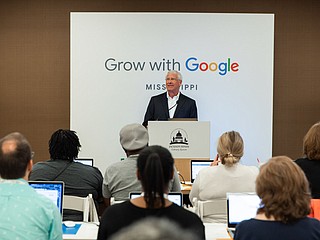 U.S. Sen. Roger Wicker, a Mississippi Republican, delivers opening remarks at the "Grow with Google" workshops at the Quisenberry Library in Clinton, Miss., on August 26, 2019. The event is part of a nationwide initiative by Google to train Americans in digital skills. Photo courtesy Google

"Money is our biggest challenge," Stephenson said of the difficulties of running a library in Mississippi's Delta region. "We are overcoming literacy issues, but now we are dealing with financial illiteracy, digital illiteracy ... There are so many people in our communities that are not prepared for the job market, that are not prepared for the education that they need to pursue."

More than 100 Mississippi business owners, nonprofit organizations, job seekers and librarians gathered at the Quisenberry Library in Clinton to participate in workshops including how to move businesses online and reach more customers; digital resources aimed at nonprofit organizations; and how to use Google's job-search tools. Attendees could also meet with Google coaches for one-on-one consultations throughout the day as they learned to use the company's online platforms.

'The Way We Create Our Jobs'

"This is the way we create our jobs in the United States today and certainly in Mississippi, so I want to acknowledge Google for doing this," he said.

"One of the library's key missions is being able to train people who are part of the digital divide," Patty Furr, executive director of the Jackson Hinds Library System, told the Jackson Free Press. "I see this as a tremendous opportunity for people in the area. Many small-business people, they don't have money to pay a consultant. ... A big advantage is that Google products are free."

Wanda Keahey, a retired pharmacist and Madison resident who attended the event, said she hopes to start her own medical nonprofit.

"I liked how (the Google coach) talked about how they would assist with meetings or seminars," she said after finishing her first workshop.

"Grow with Google" will travel to all 50 states within the next year, organizers said. Since its inception in October 2017, the initiative has trained more than 3 million Americans in digital skills, partnering with local libraries across 38 states to hold programs such as the one at the Quisenberry Library. To date, more than 5,000 partner organizations have enrolled in "Grow with Google," Google spokesperson Jessica Johnson said in an email to the JFP. Another day of workshops is scheduled for Hattiesburg on Wednesday, Aug. 28.

While the day garnered enthusiastic responses from participants, some attendees noted that Google's efforts can only translate into meaningful change alongside statewide infrastructural changes and the cooperation of local, state and federal governments. In Mississippi, where internet connectivity remains a contentious issue, many residents are unable to access basic digital literacy tools that would make them competitive in today's job market or even complete daily tasks. Data from Broadband Now show that 29 percent of the state's population has inadequate internet service. The most underserved areas are Mississippi's rural regions, including the Delta. In Carroll County, for example, only 38.3 percent of residents have 25 Mbps or higher-speed internet.

Due to the cost of installing new cables, many utility companies lack the financial incentive to service rural regions. In January, the Legislature passed the Mississippi Broadband Enabling Act, which would increase internet connectivity in rural Mississippi by allowing electric cooperatives to offer high-speed internet to clients. Electric cooperatives can apply for federal grants, but the State has not apportioned funds for the law, and it remains to be seen how long it will take before Mississippians will benefit from it.

While speaking to a group of reporters after introductory remarks at "Grow with Google," Wicker said the federal government has disagreed with the Federal Communications Commission on how to distribute federal broadband funds.

"We've got the FCC now realizing that we need better data, and we are going to insist on that before we start distributing this money," Wicker said at the event. "It's important to get this $2 billion in connectivity money out to the 50 states so that we can be better connected. It's one of the top priorities we have."

"Until we have all of the digital opportunities that a big city can have, we are going to be combatting that brain drain that regrettably is affecting all small towns and all states with rural communities," Wicker told the Jackson Free Press.

The local library fulfills several functions for patrons in the Jackson metro area. It provides access to computers and job training, a place to register their children for school and even sign up to visit a relative in prison, Furr said. Last year, 221,000 people used the Jackson Hinds Library System's public-access computers, and 172,000 people used WiFi at a public library.

Jackson resident Jeremy Smith has noticed that many members of his community lack access to basic digital skills. He attributes this to the fact that many businesses have moved out of Jackson and into the suburbs, but he was excited to bring back what he learned to the city he loves. Smith is especially interested in how digital skills can not only stimulate economic growth but also support reintegration services such as employment opportunities for formerly incarcerated people and those struggling with mental illness.

"I understand that Google is a global corporation, and from my understanding, they are really diverse. They really service the needs of all people, but if the local government is not willing to do the same, then it's not going to work. You have to lead your people, and if you're going to do so, you have to open up all doors to them, not just a few," he said.