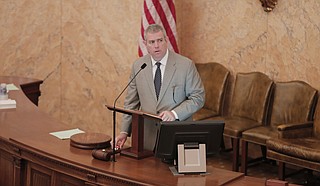 "We must always remember our past, but that does not mean we must let it define us," Gunn said in a 2015 statement. "As a Christian, I believe our state's flag has become a point of offense that needs to be removed. We need to begin having conversations about changing Mississippi's flag." Photo by Imani Khayyam

During his appearance at Tuesday's Columbus Rotary Club, Mississippi Speaker of the House Philip Gunn devoted his time to discussing the 2019 legislative session, which ended almost five months ago.

But it was an even older issue, one posed by a Rotarian at the end of his speech, that seemed to resonate best with the audience.

Gunn was asked his view on changing Mississippi's state flag, which bears Confederate imagery in its canton and has long been the subject of debate, if not action.

On June 22, 2015, Gunn, a Republican, was the first state-level elected official to call for a change in the flag. Just five days after the shooting death of nine people in a historic black church in Charleston, South Carolina at the hands of white supremacist Dylann Roof, Gunn didn't mince words in a statement released to the media.

"We must always remember our past, but that does not mean we must let it define us," Gunn said in a statement. "As a Christian, I believe our state's flag has become a point of offense that needs to be removed. We need to begin having conversations about changing Mississippi's flag."

It's been more than four years since those conversations began, but there have been no tangible efforts to address the issue, not from the Legislature, where dozens of bills have died in committee without reaching the floor of either chamber for a vote, nor at the polls, despite Gov. Phil Bryant's suggestion three years ago that it be placed on the ballot in this year's general election in November.

Gunn might have seemed an unlikely advocate for changing the flag, as he noted Tuesday.

Gunn's great-great grandfather, Joseph Bell, was Mississippi's Secretary of State from 1850-52 and a close friend of Jefferson Davis, who became the president of the Confederacy following secession.

"I'm certainly not insensitive to the history and heritage of our state," Gunn said Tuesday at Lion Hills Center. "I have to believe my great-great grandfather was actively involved in the effort to secede, that he supported that decision and fought hard for it. My history is just as strong as anyone's, but at some point we have to do what's best for all of us, not what's best for the individual."

Now, as it was four years ago, Gunn is certain the flag needs to be changed.

"For a variety of reasons, we are better off without the current flag," he said. "It's a divisive issue for our state. The flag is the banner under which groups of people are united. It represents what the group believes and stands for. Even pirates had flags — the skull and crossbones. It said rape and pillage. What does our flag say about us?"

Without the political will to change the flag in the Legislature, Gunn said he's convinced one of three things must happen before the state changes its flag.

"First, the passage of time as more and more people think about it and contemplate if we are better off with it or without it," he said.

Gunn said that while he still believes putting the matter to a vote of the people is the preferred method of changing the flag, he is wary.

"It's been almost 20 years since we voted on the flag and you know the result (voters opted by a 2-to-1 margin to keep it as is)," Gunn said. "How much have we changed since then? From what I've seen, people in the cities and business people want to change the flag. I haven't met a single economic developer who supports keeping the flag. But in the rural areas, it's a different story. It really does seem like it's 50-50 to me.

"That's the problem. If you do have a vote and it fails, it's probably another 20 years before you could take to a vote again," he added. "You have better be sure you have the votes. I'm not sure we're there yet."

The second catalyst is by far the worst imaginable.

"Sadly, what could change things is an event like we saw in Charleston, South Carolina or Charlottesville, Virginia (where riots erupted between white nationalists and counter protesters in 2017)," he said. "No one wants that, obviously."

The third possibility is the effect of outside pressure, attacking the issue from allegiances even stronger than a devotion to history or heritage.

"The third way is the NCAA," Gunn said. "When the NCAA starts saying that Mississippi State can't host a regional or Ole Miss can't go to a bowl game until the flag is changed, then it's suddenly a whole different story. I think people might start having a whole different view of the flag then. That could change it."

Slim Smith is a columnist and feature writer for The Dispatch. His email address is [email protected].

Reprinted by permission of The Dispatch, serving Columbus and Starkville, Miss.