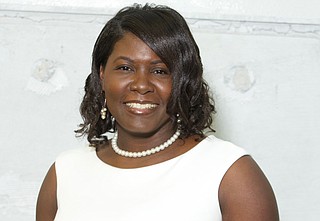 A few years ago, Joanne Bell Wright hit a rough spot in her life and was having issues with things like relationships and finances.

"It was just really heavy," she says, "and I was doing it all by myself. ... I wasn't talking to a lot of people and sharing what I was going through, and it was heavy on me," she says.

She had a revelation from God that she should begin sharing her struggles in a more public way, she says. In October 2014, she started her Facebook page, Woman To Woman with Joanne. She was apprehensive at first about being so transparent in a public sphere, she says, but after other women started thanking her for sharing and started telling her about their struggles, she began to realize that she wasn't alone.

She did the first Woman To Woman with Joanne Empowerment Conference in 2015.

"Relationships have been built from that first conference that are still going strong, and that's the whole premise around Woman to Woman with Joanne, empowering women beyond their circumstances," she says.

This year's event title is "Secure in Him."

"I chose that title because there's so many women, including myself, who find security in other things and other people, whether it's a relationship, a marriage, whether it's the money that we make or the job title that we have, and I know that looking for security in Christ is where we'll find the most security, the most peace and everything else that we need," she says.

It's important to empower women, Wright says, because they tend to carry a lot of weight.

"We're depended on so much," she says. "Our families look to us, on our jobs we have so much that we have to carry, and I think that empowering women beyond their circumstances is very important at this day and age because there's so much coming at us. Some of us are single. Some of us are married. A lot of the burden falls on us. Some of us are divorced, and it's heavy, and we don't know where to turn."

The conference isn't one where someone will simply preach or talk at participants, she says.

"These speakers are coming to share their individual stories to say, 'Hey, I have been where you are, and now that I have gotten maybe a little bit further, I may not be all the way delivered, but I can help you to get to where I am, and then we can walk out this journey the rest of the way together,'" she says. "It's important for women to know their value, and to love themselves first, and then we can teach other people how to love us."

If a woman doesn't believe in herself or love herself, she says, she will attract people who don't see her worth or love her for who she is.

Speakers at the fifth-annual conference include Kimberly Campbell, who served as a State representative from 2008 to 2016; and ex-WNBA player Juanita Ward; and Wright's daughter Mya Bell, who will speak to the younger participants in the conference. The other speakers are Mary Ward, mother of Juanita Ward, LaTanya DeLoach and Maya Schopmeyer.

Wright also has a monthly magazine publication called Woman To Woman With Joanne, which she started in May 2016.

"We provide a platform for Mississippi women to share their stories to encourage women all around the world," she says. Online, the publication reaches around the world. Subscribers can purchase any issue from the publication online, and it will print on demand. Most of her subscribers are from the Jackson metro area, but some are from other cities in and outside of Mississippi.

The Empowerment Conference is Saturday, Aug. 31, from 9 a.m. to 1 p.m. at the Two Mississippi Museums (222 North St.). Buy tickets at eventbrite.com. For more information, find the event on Facebook.

CORRECTION: This story has been edited to reflect corrections. Joanne Bell's full name is actually Joanne Bell Wright. Her husband's name is Maximus Wright, and her daughter is Mya Bell. The JFP apologizes for these errors.