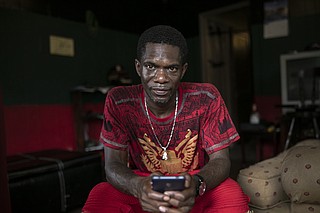 Joshua K. Love sits in the living room of his home in Greenwood, Miss., Saturday, June 8, 2019. Love says he was sexually abused by two Franciscan friars at a local Catholic grade school. Photo by Wong Maye-E via AP

JACKSON, Miss. (AP) — Catholic sex abuse survivors in Mississippi and Wisconsin on Thursday demanded that federal authorities investigate allegations from three black Mississippi men who say they were molested by Franciscan friars during the mid-1990s, when they were as young as 9 years old.

Mark Belenchia, the Mississippi leader of the Survivors Network of those Abused by Priests, issued a statement calling for federal law enforcement agencies to "pursue any federal charges that may be possible due to the interstate transmission of the victims for the purpose of rape and exploitation by abusive clergymen."

"It's time for the outside authorities to come in and investigate ... find out what we know, what they know and what they've covered up — because I guarantee you, they covered it up. It's just systemic," he said at a news conference in front of the offices of the Jackson diocese.

Stephen J. Carmody, an attorney who represents the diocese, told The Associated Press that the diocese took all the proper steps in the case, including making reports to police and social services officials when it first learned in 1998 of abuse allegations against a friar.

Cousins Joshua Love and La Jarvis Love and a third man, Joshua's brother, Raphael Love, say they were repeatedly abused by Brother Paul West during the 1990s, when they were elementary school students at St. Francis of Assisi School in Greenwood, Mississippi. Joshua Love says he also was molested by the late Brother Donald Lucas.

In addition, the alleged victims say they were repeatedly molested by West during excursions to Wisconsin and New York.

The calls for federal action came in response to an AP investigation, which found that a Wisconsin-based group of Franciscans paid Joshua Love and La Jarvis Love $15,000 each to keep silent about their claims and never file lawsuits.

"Your office and help are critical in the effort to secure justice for these survivors and to help prevent future cases of child sexual abuse," Isely said in each of the letters.

The cash payments are far less than what other Catholic sex abuse survivors have typically received since the church's abuse scandal erupted in the United States in 2002.

And the non-disclosure agreements violate a 2002 pledge by American Catholic leaders to eliminate them in settlements with survivors, unless specifically requested by victims.

Belenchia called upon the diocese to remove its victim assistance coordinator, Valerie McClellan, because she played a role in negotiating a settlement between the Franciscans and Joshua K. Love while acting as his therapist.

"She needs to be removed. She's no longer effective," Belenchia said. "There's no good reason that she should have been sitting in on a negotiation of something that's not even supposed to be happening. Now, they're going to give all kind of excuses as to why she was there. None of them are valid. They gave these men $15,000 apiece. They tried to negotiate — one of them, it started out at $10,000. This is deplorable."

McClellan told the AP that she did not advise Joshua Love to take the settlement and that she maintained appropriate boundaries between her twin roles as the diocese's victim assistance coordinator and as Love's therapist.

In its investigation, the AP also found that West, after being recalled from Mississippi following an abuse allegation by Raphael Love, took a job teaching fifth grade at St. John School, in Little Chute, Wisconsin.

The school issued a statement Wednesday saying background and reference checks on West found there did not find any allegations against him, adding that it had not received any complaints in the decade he was teaching there.

West declined to answer questions from the AP. Lucas died in 1999, an apparent suicide. But earlier this year, the Jackson diocese included West and Lucas on a list of "credibly accused" Catholic officials.

Belenchia said the Rev. James G. Gannon, leader of the Franciscan Friars of the Assumption Blessed Virgin Mary Province, had tried to "cover up a crime."

"I've been doing this for almost 20 years and I've worked with a lot of survivors, and I've never seen anybody treated like this by the church. It's tragic. And if anybody doubts that there's racism involved here, they're blind," he said.

Gannon said the race and poverty of the three men had no bearing on the settlements they were offered. "Absolutely not," he said.

Gannon also said he believes that each of the three men were abused.

"We've hurt them tremendously and no amount of money would ever account for what happened to them," he said.