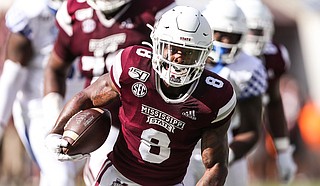 JACKSON, Miss., Dec. 1, 2019 /PRNewswire/ -- Mississippi State's Kylin Hill, the SEC rushing leader and the 12th leading rusher in the nation in Division 1 college football, was the top vote getter and winner of the fan voting segment of the 2019 C Spire Conerly Trophy, which annually honors the top college football player in Mississippi, it was announced Sunday.

Hill, a junior from Columbus, Mississippi, received 16,776 votes from fans, which counts for a weighted 10 percent of the award. Ole Miss freshman quarterback John Rhys Plumlee finished second with 10,539 votes and Alcorn State quarterback Felix Harper was third with 6,154 votes. A panel of sports journalists decide the remaining 90 percent of the award and the overall winner.

A record 43,837 votes were cast for the 10 finalists from Magnolia state public colleges and universities via online voting during the six-day long fan voting period sponsored by C Spire and the Mississippi Sports Hall of Fame and Museum. This year's overall winner will be announced at a special banquet Tuesday night at the Country Club of Jackson.

Hill led the SEC in rushing with 1,347 yards and 10 touchdowns, including 132 yards on 27 carries in a 21-20 victory for the Bulldogs against Ole Miss in Thursday's 92nd annual Battle for the Golden Egg rivalry game. He finished the regular season with eight 100-yard rushing games for Mississippi State, tying the single-season record.

The awards program is scheduled for Tuesday, Dec. 3 at the Country Club of Jackson, 345 Saint Andrews Drive, in Jackson. A 5:30 p.m. reception will be followed by the 6:30 p.m. dinner program and trophy presentation. Coaches and finalists from the schools are expected to attend. For tickets or more information, go to msfame.com or call 601.982.8264. Former Southern Miss football legend Reggie Collier will be the featured guest speaker.

This is the seventh time in the award's 24-year history that fan voting has been allowed for the prestigious award. "We have some of the most passionate college football fans in the country and this gives them a way to have their voice heard in choosing Mississippi's best college football player," said Jim Richmond, vice president of Marketing for C Spire.

The award is named after the late Charlie Conerly – the only football inductee in the Mississippi Sports Hall of Fame who was an All-American at a Mississippi university, an NFL rookie of the year and NFL All-Pro member and quarterbacked a team to a world championship. C Spire has sponsored the outstanding player awards program for all major college sports since 1998.