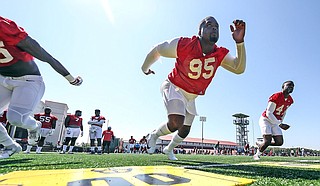 College football players who have finished their playing careers as seniors or graduating juniors use bowl games as a chance to showcase their talents to NFL scouts. Playing in a bowl game can help or hurt draft chances for players and provides another opportunity to put more play on film.

The Reese's Senior Bowl is one of the biggest chances for players who do not get a bowl game to play to improve their draft stock. NFL coaching staff members coach both teams, and the NFL shows practices on its NFL Network.

Senior defensive tackle Benito Jones will represent the University of Mississippi in the 2020 Reese's Senior Bowl. He is the fifth Rebel in the last four years to be invited to play in the game.

Jones signed with UM after an outstanding high school career for Wayne County High School. The Waynesboro, Miss., native finished his senior season with 83 tackles and 14 sacks as Wayne County won the 2015 5A State Championship.

The Mississippi Association of Coaches named Jones the 5A Defensive Player of the Year. He played in the Mississippi-Alabama All-Star Game. a 2015 Dandy Dozen selection, USA Today All-American, Under Armour All-American, MaxPreps Medium School All-American. He was a top-10 recruit as a defensive tackle by every national scouting service.

Jones played in all 12 games with four starts as a freshman in the 2016 season. He made 39 total tackles, 13 solo tackles, 4.5 tackles for a loss, and 0.5 sacks. A 2016 SEC All-Freshman Team by Athlon and Gridiron Now and 2016 Freshman All-American Third Team by Athlon.

As a sophomore in 2017, Jones once again played in all 12 games and made 10 starts as a nose tackles. He recorded 29 total tackles, 18 solo tackles, 7.5 tackles for a loss, 1.5 sacks, one forced fumble and one fumble recovery.

In 2018, Jones was one of three players on the team to start all 12 games. He made 34 total tackles, 16 solo tackles, nine tackles for loss, and three sacks.

Jones played in all 12 games and made 10 starts as he finished with 30 total tackles, 19 solo tackles, 10 tackles for loss, 5.5 sacks, one pass defended and one interceptions. He tied for 10th in the SEC for tackles for a loss and placed 12th in the SEC in sacks for the 2019 season. The defensive nose tackle finishes his career ranked ninth all-time in tackles for loss with 31 in 48 career games played.

The 71st Senior Bowl will take place at Ladd-Peebles Stadium in Mobile, Ala., on Jan. 25, with kickoff at 1:30 p.m. and broadcasts on NFL Network.