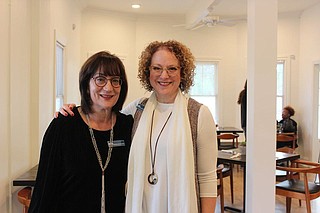 After working and living in Jackson for 52 years, Executive Director of Growing Up Knowing Dana Larkin has stepped down from her position and moved to the Washington D.C. area to be closer to her family and grandchildren.

"Leaving Jackson, Miss., has been the hardest thing I've ever had to do except raising children," Larkins says. "It's been hard. We've had a really good life in Jackson, and we loved it."

Larkin, 64, was born in Chicago but moved to Jackson at 6 years old. She went to school in Jackson and attended Murrah High School but went to college at the University at Albany in New York, where she majored in sociology.

Larkin says what drew her to this line of work was being involved in public schools with her husband and the importance of public education.

"Public education is extremely, extremely important," Larkins says. "My husband served on the school board in Jackson for eight years, and we were volunteers and parents at the public schools, getting involved in our kids' public schools."

Growing up Knowing is an organization from Jackson that focuses on engaging early childhood, elementary and middle school students along with their parents in learning correct information and communication skills associated between children and their parents involving sexual health and responsibility.

"We released that we are the only program in the state that was educating kids and parents together—or grandparents or caregivers—so that's been our niche," Larkin says. "We educate across the generations."

Larkin is married to Jonathan Larkin and has two children with children of their own. Like most grandmothers, she says what time she spends outside of working is spent obsessing over her grandchildren.

Larkin's children are currently living outside of Mississippi. Alexis Larkin-Shwartz is married and has two children and lives in Maryland. Larkin-Shwartz works as the director of the Israeli affairs at the Jewish Community Relations Council for Greater Baltimore, and her sister Brianna Shahvar is a school administrator who lives around Oakland, Calif.

"What's really important is my children. I'm very proud of them," Larkin says.

Larkin says her work was and is still very important. She says her position at Growing up Knowing had a variety of facets, including program building, writing grants and collecting data.

"(Growing Up Knowing) is a very small organization, so I do everything as executive director," Larkin says.

Despite working in every aspect of the organization, Larkin says she got plenty of help from the rest of the staff and was thankful for it.

Larkin says sex education is extremely important for development. She says the structure of sex education in Mississippi is flawed in that it focuses on abstinence always, but research shows that that style of teaching is not effective. It also neglects students' knowledge of consent.

"There are lots of reasons (sex education and affirmative consent are important), but first of all, research says that it is necessary," Larkin says.

"The three goals of each of our programs are to impart accurate information, get children and their parents talking—or to communicate better—and the third is to create a culture of consent," Larkins says. Almost every time we do a My Body, My Boundaries program, some parent tells us how amazingly great it is and how helpful it is because they were abused as a child."

Larkin says she believes her replacement Tammy Golden, who was previously an office administrator for Wilkins Patterson Smith Pumphrey & Stephenson P.A. law firm, will do an amazing job in her stead.

"I am very proud of all we accomplished under my leadership and am confident that Tammy will continue to build upon (Growing Up Knowing's) success in collaboration with the board, facilitators, donors, community partners and family participants," Larkin says.

Larkin currently does not have a position lined up in her new state, but she says she wants to continue with a similar job that teaches sexual education.

For information on Growing up Knowing, visit growingupknowing.org.