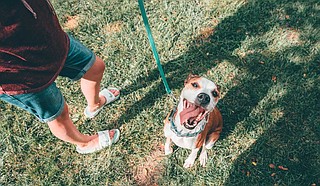 When my last relationship ended about four years ago, I was at a crossroads. For the first time in my 20s, I was single. A couple of months before, I had moved in with my sister, and I was slowly transitioning into being an adult. The breakup sped up that process.

I had a lot of choices to make, and one of those was how to occupy my free time, or really, how to distract myself from all that was going on.

I finally did what I said I was going to do for years and began attending a nondenominational church. I also briefly decided to become a baker and later an artist—something that has stuck to this day. And I began volunteering in the community.

After the breakup, that volunteer work became imperative. But it wasn't so much a way to give back to the community as it was a distraction. For those few hours, I didn't have to think about everything that was happening. I could just serve the community in whatever I was doing and think of nothing else.

At first, it was just CARA. I would occasionally go to their adoption events and be a dog handler, and I always got the most energetic one. It was fun, and I got to be around animals—something I love. A few months later, I decided to volunteer at Mississippi Comic Con and discovered one of my random talents: I'm really fast and efficient at putting wristbands on people. To this day, I still judge people harshly when they put a wristband on me (there is an art to it). About three years ago, I was also a volunteer during the Mississippi Blues Marathon. And for a decent chunk of 2018, I volunteered with daniel johnson's Significant Saturdays and curious citizens initiative.

These days, I don't have as much time to volunteer in the community, but it's still important to me to give back in whatever way I can, whether it's helping with setup at CityHeart Church or participating in one of the outreach events.

In a 2008 study, researchers at Harvard University found that doing good deeds raises a person's level of happiness. Other studies have shown that happiness can create a positive feedback loop in your brain. It also helps people feel more gratitude toward their own lives, and doing good deeds creates more social connection—something all humans crave. So obviously it's a good thing to do a good thing.

One of this year's power couples,  Tyrone Hendrix and his wife, Ercilla Dometz-Hendrix, have a passion for helping Jackson, specifically south Jackson, where Hendrix grew up and the family currently lives. He served the south Jackson neighborhood when he was a councilman, and he and Dometz-Hendrix still try to help the area as much as possible.

"We're always there to help," Dometz-Hendrix said. "We always tell people that we're a phone call away."

They have helped the city in many ways, from his years on the city council to her advocacy for students in Jackson Public Schools. That sense of community and giving back is important to them.

Nicaragua native Dometz-Hendrix said: "Before I came to the states, my dad even to this day still tells (me and) my siblings ... 'Wherever you go, you have to make wherever you are better.'"

In the interview, we talked about how Jackson is a small big city, meaning it's pretty large, land-wise, but in a community aspect, it's a fairly tight-knit community. When most of us are out and about in the city, we'll probably meet someone we know or know through someone else.

I've also heard multiple people say that we're so small that if you have an idea, you can make it happen here. For the most part, that's pretty true. My job here has  allowed me to see a lot of interesting and wild ideas implanted in Jackson. Some have failed, but a lot more have stuck. But one thing always seems to remain: that sense of community and loyalty among the people who live, work and play here.

There's no question, really from anyone, that Jackson needs help. The public schools still don't have enough funding to give all kids an adequate and equitable education. Over the last few days, two of our reporters have dealt with damage from potholes—and a pothole on Old Canton is the reason I'm missing a hubcap. The water tastes like someone threw dirt in it, and I constantly get boil-water notices for different neighborhoods in the city.

A lot of us want to look at these problems, and then turn toward the local and state government to fix them. Granted, there are a lot of things that we either can't or aren't allowed to do, but there are things we can fix.   For example, what would happen if a group went out once every couple of weeks or so and cleaned up places like Mill Street? What if people stopped looking down on places like south Jackson and actually invested more in the community? What would happen if there were more dialogues about what we as the people can do?

Many Jacksonians are doing that work, but we need a lot more. We need more dialogue across all barriers. We need more people who are willing to go out and connect with each other. We need people who will roll up their sleeves and do the work. We won't have many more ideas stick if we can't sit down and address some of these problems.

We all need to step up and fight for Jackson because our ideas matter.

Managing Editor Amber Helsel is a  storyteller who moonlights as an artist. She loves food, cats, anime and art supplies. You can often catch her running sound at CityHeart Church. Email story ideas to [email protected].