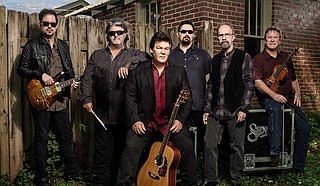 When the Dixie National Livestock Show & Rodeo returns to Jackson from Feb. 7 through Feb. 13, another southern institution will be returning with it: Grammy Award-winning country act Shenandoah.

Lead vocalist Marty Raybon says that he remembers performing in Jackson with Shenandoah in early 1990, when the Muscle Shoals, Ala.-native group was gaining international attention with hit songs such as "The Church on Cumberland Road," "Two Dozen Roses" and "Sunday in the South." Raybon rejoined the band, which now includes musicians Mike McGuire, Jamie Michael, Donnie Allen, Brad Benge and Travis Mobley, in 2014 after leaving about 17 years prior.

"Man, we're looking forward to coming back," he says of Jackson. "We always enjoy doing rodeos. It's the crowd. ... Rodeo folks are our type of people. I'm not (saying) that we're horse farmers or cattlemen or anything like that, but I mean, that's literally who we are. We're Middle America. We're folks that believe you work the same way like everyone else does to get ahead in life. Normally, what you find with people like that are folks that genuinely like what we do with music."

That is not to say that Raybon backs the idea that Shenandoah's music is for any one audience. There may be different tastes and some listeners who prefer one genre to another, he says, but a great record will sell to anybody who loves it.

"It's just real wholesome music with lyrics that really say stuff, that edifies and says something to people in their lives," Raybon says. "That's the kind of stuff we've done literally all our careers. That's what we strive to do anytime we do a record is find the tunes that really, truly, honestly try to say something to people."

In part, that comes from the fact that Shenandoah has always been a faith-based band, he says. Many of the group's most famous songs are centered on Christian themes, and the musicians even put out a gospel album, "Good News Travels Fast," in April 2016 as their first new release following Raybon rejoining the band. Another element of performing more wholesome material is that it's just more accurate to who they are, he says.

Most recently, Shenandoah released a full-length titled "Reloaded" in March 2018. The album is primarily made up of newly recorded live versions of popular songs from Shenandoah's repertoire, which has included 13 No. 1 records thus far.

Likely most exciting to fans, though, is the fact that "Reloaded" also features the band's first new music in almost 20 years—singles "Noise," "That's Where I Grew Up" and "Little Bit of Livin'." For those three songs, Shenandoah teamed up with producer Jay DeMarcus, who is best known as the bassist for Rascal Flatts.

With the singles still being so new, Raybon says the verdict isn't completely in yet as far as fans' reactions, but he does get to see the songs connect with audience members each night, just as Shenandoah's classics do.

"The biggest comment that we've had, you know, that really means a lot to us, is that people have said, 'Man, it may have been 20 years since y'all have done a record, but it sounds like you hadn't gone anywhere,'" he says.