King (Cakes) for a Day 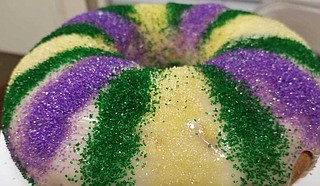 If you live anywhere in or near the Gulf Coast from Louisiana to Alabama, chances are king cakes are pretty prevalent. Traditionally, people eat the cake on Jan. 6 for Epiphany, or the Twelfth Night, which marks the night the three wise men gave gifts to baby Jesus.

The cake itself pulls its origins from France. Southern Food and Beverage Museum founder Liz Williams told The Times-Picayune in 2012 that the cake actually has two types: the galette de roi (puff pastry with an almond filling) and the gateaux de roi, which has the familiar ring shape. The galette was more popular in northern France, while the gateaux was popular in the south. Many of the French who settled in New Orleans were from southern France, and they brought their treat with them. Here is where you can  enjoy some of the local versions.

Almond cream cheese king cake with cream cheese and almond pastry cream, and icing with Carnival-colored sugar; a traditional cinnamon king cake; a "crawfish dip" one with a cheddar and jalapeno brioche and a crawfish-dip filling