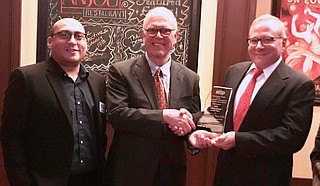 On Jan. 31, the Jackson chapter of technology organization CompTIA Association of Information Technology Professionals named Richard Sun (middle) as Mississippian of the Year. He says the award represents the collective achievement of everyone who is involved in the Mississippi Coding Academies. He is pictured with MSCA instructor Javier Peraza (left) and AITP President Bart Uharriet (right). Photo courtesy Mississippi Coding Academies

While Richard Sun spent most of his working life maximizing shareholder value, he says Mississippi Coding Academies, of which he is a co-founder, is about maximizing human capital. The program takes recent high-school graduates and trains them for 11 months in becoming full-stack coders, or those who have enough functional knowledge and skill to take a computing project from start to finish.

Because of the program's work, the Jackson chapter of technology organization CompTIA Association of Information Technology Professionals, or AITP, named him Mississippian of the Year.

"That was quite a validation," he says. "... I was given the award because they had to give it to one person, but it really represents a collective achievement of everybody that's involved with the academy."

For 25 years, he worked in positions such as an associate in private finance for Goldman Sachs from March 1976 to January 1981, the first vice president for UBS from February 1991 to March 1994 and the director of global private equity firm Emerging Markets Partnership from March 1994 to April 2001.

He and his wife, Phyllis Hollenbeck, moved to Jackson in 2008 to advise a local businessman. He joined the Innovate Mississippi board of directors in 2009 and served as chairman from May 2015 to May 2017.

In February 2017, Sun and Innovate board of directors members Mike Forster and Deborah Bailey were talking to Glen McCollough at the Mississippi Development Authority about what the Base Camp Coding Academy in Water Valley was doing. After seeing a need to connect more coders and potential coders, McCollough asked them to create a similar program in Jackson and eventually Columbus and then Starkville: the Mississippi Coding Academies.

The program in Jackson began in October 2017, and the one in Columbus began in November 2017. That program later moved to Starkville. In September 2018, the Mississippi Coding Academies graduated 12 coders. Three coders from the Jackson academy and one from the Starkville academy went to work at the U.S. Army Corps of Engineer's Engineer Research and Development Center, a major government research lab, in Vicksburg.

"There's a lot people teaching coding in a lot of different ways," Sun says. "What is special about ours is it's a full-time, 11-month program, Monday to Friday, 9 (a.m.) to 5 (p.m.). It's like an unpaid apprenticeship. They're working as if they would at a company, and if you saw what they were doing, it wouldn't look like a classroom. It would look like a company that's writing code."

While there is some formal instruction, Sun says, 80 percent of the time the students are working on coding.

"It's much more 'learn coding by doing projects,'" he says.

The students also go through project evaluations, and the coding academies will also bring in potential employers to let the participants experience corporate performance reviews.

"When our coders graduate from here, they have the experience of working in a company-like environment for 11 months," Sun says. "They have been held to the standards they would be when they're working, and they've gone through several performance reviews."

As a result of those reviews, some of the coders have been hired before graduation, Sun says.

"You can think of them as an extended interview," he says.

He says there are about 1,200 unfilled coding jobs in Mississippi and 500,000 in the U.S.  "Companies like Apple, Microsoft, Amazon, are constrained in their ability to grow by the lack of these coders," Sun says. "We haven't trained enough of them."

Some coders may learn computing better in a workplace-simulated environment as opposed to in a traditional classroom setting, he says, and computer programmers and web developers are so valuable and mobile that companies cannot afford to invest in training them because they will leave before the business gets its return on investment.

"The inability to get people like this trained either in a corporate environment or in volume in an academic environment means there's this huge hole in the workforce," Sun says. "As an unconstrained startup, we could find an effective way to train these coders."

He says there is a huge need for coders who are not going into computer science. If we train people like musicians, artists, writers and graphic designers in full-stack coding, he says, they could write better code because they could apply their skills to user interfaces.

"It's much better to have somebody with an artistic aesthetic doing that coding work, writing the web programs that create the browsers and the apps," he says. "It's a part of computing that's called, (UX/UI), user experience, user interface, and the people that can do that well, i.e., the people that have the technical and computing skills and the artistic skills are some very valuable people in the industry."

Sun believes he and the coding academies received the award from AITP largely because of the coders themselves.

"They gave us 11 months of their time for free," he says. "You could look at it as free college or free trade school ... but we hadn't done it before. They put a huge trust in us." The Mississippi Coding Academies' next class of coders start in June 2019. The program is also doing Veterans Code, where participants receive coding and workplace training five nights a week. For more information on the Mississippi Coding Academies, visit mscoding.org.