The Most Intriguing of 2018 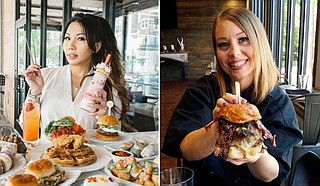 If you're glad to see 2019 finally here, you're not alone in that sentiment. The last year was a crazy and draining one, to say the least, but crazy often means that intriguing people came out of the woodwork. Here are some of the people whom we found the most interesting, for better or worse.

The two better-known foodies in the Jackson metro area are probably Rachel Phuong Le and Alivia Ashburn-Townsend, admins for #tricountyfoodies and also members of other groups such as Jackson Foodies.

Le is "food's biggest fan" and is constantly searching for new things to try, and Ashburn-Townsend is a Jackson chef and foodie who has been on the scene for a long time. Both have a passion for local food and restaurants, and love to introduce Jackson-metro residents to new cuisine and restaurant options.

Last year, the women announced they are now joining Jackson's restaurant scene as vendors for Cultivation Food Hall, bringing new cuisine with them. Le will open poke restaurant Poke Stop, and Ashburn-Townsend will bring New York deli flair to Jackson in Ariella's NY Delicatessen. Be on the look out for news about Cultivation Food Hall on Facebook. —Amber Helsel

If you haven't heard, Operation Shoestring Executive Director Robert Langford and the education nonprofit were up to a lot in 2018. Not only did the organization celebrate its 50th anniversary in 2018; it has also been renovating its space on Bailey Avenue since October.

Langford, who has been the executive director since 1997, oversees programs such as family communication and parenting classes; athletic summer camps; a food pantry and a set of after-school and summer programs called Project Rise.

William and Deborah Bynum, president and first lady of Jackson State University, respectively, have had a busy year of raising money and launching new programs to support JSU's students and the Jackson community.

William was sworn in as the college's 11th president on Oct. 11, 2018. At a dinner celebrating his inauguration, he raised $305,000 from donors to put toward student scholarships. On Oct. 17, Deborah raised $25,000 through her own inaugural scholarship luncheon at the Mississippi Civil Rights Museum.

In summer 2018, Bynum also challenged JSU alumni to raise $5 million over two years as part of the National Alumni Association's Millions of Eyes on Excellence Fundraising Campaign. He also took part in a technology roundtable on workforce development and training in February.

Rukia Lumumba, an attorney, the daughter of former Mayor Chokwe Lumumba and the sister of the current mayor, is intriguing on many fronts. That includes her deep work to get out the vote this fall, helping black candidate Mike Espy come closer to a U.S. Senate seat than any Democrat since 1982.

But it's her determination to bring "credible messenger" violence prevention to Jackson, and her outreach to unexpected team members, that makes her intriguing to us. Before she returned from New York City to live in her hometown of Jackson, Lumumba was deeply involved with the effort to transform former criminals into credible messengers and "violence interrupters" based on the renowned cureviolence.org model.   The idea is to find people who have served time and now want to help others avoid the same path. Train them. Have them interact with others at high risk of committing violence, or even "interrupt" a potential act before it takes place. They can reach people the police and others cannot.

For her initial team, Lumumba chose Terun Moore, a black man who served 19 years for killing a man in a robbery when he was a teenager. She also chose Benny Ivey, a former white-gang leader and meth addict in Rankin County. Ivey, who grew up robbing houses in south Jackson and was in prison multiple times over two decades, was first profiled locally in the Jackson Free Press. The three also work with JPD Assistant Chief Ricky Robinson.

The team got good news in December—a $150,000 seed grant from FWD.us, an organization funded by technology giants. Moore and Ivey will be the first messengers trained using the funds. Read more at jfp.ms/interrupters. —Donna Ladd

The original idea was to create a tool that would allow people to take pictures of automotive parts and to identify them easier. Amazon acquired Partpic in 2016, and Sephus and Walker joined the business in Atlanta.

But what's most intriguing for Jackson isn't necessarily the technology. It's Sephus' organization, The Bean Path. When she left for college, she had the idea to bring back what she learned about the technology world to Mississippi. In fall 2018, she did just that when she launched The Bean Path, which has the initiatives of bridging the gap between entrepreneurs and technology, exposing youth to coding and engineering, and awarding scholarships and grants to those who are interested in technology or grassroots organizations to help with needs such as new laptops. For more information, visit thebeanpath.org. —Amber Helsel

If you aren't in politics or the media industry, you may not know much about what goes on at the Mississippi Capitol, or even what you can do there. daniel johnson, who owns creative consulting firm Significant Developments (and does not capitalize his name), began to change that last year with his new initiative, curious citizens, last year. The program, which he launched in summer 2018, aims to let people explore the Capitol and the activities within it. curious citizens hosts orientations each month, and once people complete orientation, they receive a pin to wear at the Capitol on their adventures.

On Jan. 8, the opening day of the legislative session as this issue hits the streets, johnson is hosting the curious citizens Capitol See, where participants can learn valuable information such as where to request important documents, how to reserve space at the Capitol and how to search the Legislative Resource Library.

As part of other initiatives with Significant Developments, johnson also hosted the "Aging Artists Exhibition," which displayed paintings accompanied by stories from senior citizens in Jackson community centers, Significant Saturdays at Offbeat (the third Saturday of each month) and more.

The moment Gov. Phil Bryant appointed Cindy Hyde-Smith to the U.S. Senate to fill a vacancy, she became the first Mississippi woman to serve in Congress. While she had flown under the radar as secretary of agriculture, the cattle farmer from Brookhaven stoked plenty of intrigue during her race to be elected to the seat.

Her bizarre, seemingly off-the-cuff comment at a campaign stop in Tupelo first drew national attention. "If he invited me to a public hanging, I'd be on the front row," she said of a rancher there. The video, revealed by Lamar White of the Bayou Brief, drew reporters from across the world to Mississippi, asking why a senator from the state that historically had the most lynchings of African Americans would so cavalierly invoke the specter of the state's deadly past.

Hyde-Smith, who was running against former U.S. Secretary of Agriculture Mike Espy, who is black, said it was just an "expression of regard." She refused to comment further, and at a debate, she offered a half-hearted apology and blamed Espy for "twisting" her words.

Her refusal to discuss the "public hanging" remark led the Jackson Free Press, with the help of a tipster, to uncover her high school yearbook. She attended a segregation academy that opened in 1970 to allow white parents to avoid sending their children to school with black children after a Supreme Court ruling mandated integration. Photos show Hyde-Smith posing with her fellow cheerleaders and a mascot dressed as a colonel and holding a Confederate flag.

The night she was elected, her campaign's official Twitter account tweeted out attacks on the Jackson Free Press reporter who broke the story, along with White and others. "Y'all find  @CindyHydeSmith's middle school yearbook yet?" a tweet with the hashtag "#FakeNewsGotBurned" read. Though she beat Espy, she won by the narrowest margin of any GOP U.S. Senate candidate in Mississippi since 1982. —Ashton Pittman

From releasing his critically acclaimed memoir, "Heavy," to receiving an honor from the City and Mayor Chokwe Antar Lumumba, Jackson native Kiese Laymon had a busy 2018. His memoir follows his path of "growing up a hard-headed black son to a complicated and brilliant black mother in Jackson, Mississippi," as he describes the opus on his website.

Laymon has also been on a journey that recently led him back to his home state. Laymon left Jackson after getting kicked out of Millsaps College at the age of 19. He came back three years ago, and currently serves as the Ottilie Schillig Professor of English and Creative Writing at the University of Mississippi. In his remarks after receiving a proclamation from the mayor in October, Laymon said the current leadership with a mission to make Mississippi's capital the most radical city in the world offers a proud talking point during his travels.

"Everywhere I go in this nation, and in this world, everybody is asking me about Jackson and about Antar and about our city," Laymon said of the mayor in October. "I hope we can continue to artfully, critically assess our City, and I hope we continue to love our own." —Ko Bragg

In October, he released "The Last Cherry Blossom," a follow-up to his successful 2016 album, "The Day I Died," which itself had a viral hit in the song "Gullah Gullah Island." While "Cherry Blossom" has done well overall—every track has already reached quintuple digits on Spotify—it was likely the single, "Skrr Skrr," that turned heads in high places.

"Skrr Skrr" has garnered more than 1.2 million streams on Spotify thus far, with its skyrocketing popularity due in part to its use in a meme featuring the 1990s cartoon "Dexter's Laboratory," edited to include the song.

Stapleton's management team at OurGlass Media Group announced in December that they had penned a deal with RCA Records and Sony Music Entertainment to re-release "The Last Cherry Blossom" this coming February.

It will be interesting to see how major-label backing affects the album's reach, but it is worth noting that Stapleton's "Cherry Blossom" has already made an impact solely with a homegrown squad of Jacksonians behind it, including manager Brad  "Kamikaze" Franklin, producer Darrin "Flywalker" Givens, engineer Shell Enns and lawyer Jeffrey Graves. —Micah Smith