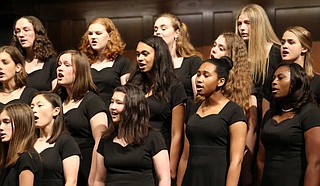 Lillian Lee founded the Mississippi Girlchoir in her living room in 1995, with just 17 participants. The program has grown in numbers as high as 120. Photo courtesy Kathryn Rodenmeyer

Mississippi Girlchoir isn't just about teaching girls how to sing. It's also about empowering them to be strong leaders and letting them get experiences with performing around the world.

In 1995, local music teacher Lillian Lee founded the Mississippi Girlchoir in her living room, starting with 17 girls Since then, the choir has grown to as high as 120 members, and now has two choirs: the training choir, designed for third- through eighth-graders, and the Bel Canto, the concert touring choir for eighth- through 12th-graders. The training choir is open to any participant who registers online; however, the Bel Canto is an audition-only choir.

Scott Sexton came on board initially as a piano accompanist and now serves as the artistic director, and Kathryn Rodenmeyer serves as the executive director.

"We firmly believe we can work with anyone and teach them to sing, so the younger students only have to sign up and go to our website and register through there," Sexton says.

"Eighth through 12th grade has to do an audition. We're just looking for if they can sing in key and hold a pitch. Usually if they can hold a tune, we'll take them. It doesn't have to be a big audition either. It can be as simple as singing 'Happy Birthday.'"

"We like to really empower our girls to be strong leaders, so we've had people come in and talk about leadership, good mental health and good stress-relieving techniques," Sexton says.

"We really try to bring in all kinds of outside people. The girls are getting an excellent choral education, but they are also getting way more. We take pride in that our girls have awesome character and are well-rounded music students."

Once a year, the Girlchoir also holds an event called "Treble Song," a three-day workshop open to seventh- through 12th-graders that typically takes place in February and culminates with a concert at the end. Treble Song is in its 17th year and attracts girls from all over the state. This past year, Mississippi Girlchoir hosted Treble Song with Samira Merdžanic, a clinician—someone who helps with choral training workshops—that Sexton met while working in Bosnia for her choir.

"We brought Samira over here for our Treble Song this year. She was our first international clinician," Sexton says. "All of the clinicians work on about six or seven pieces, so we're lucky that some of her pieces were from Bosnia. She was able to share that music with students from all over Mississippi, and we're proud to say that was a first. That was a really rewarding experience."

In June, the choir traveled Montreal, Quebec, in Canada for a four-day trip, where they had two-to-three-hour rehearsals each day with two other choirs, and then performed in a concert at the end of the trip.

"We offer travel experience and that exposure of singing on real world stages," Rodenmeyer says. "We also had a collaboration with Alliance Francaise de Jackson, and we invited their members to come do a concert. In return, they provided a speaker for our girls to come and talk about Montreal and French culture and language, which was a really good educational opportunity."

The Girlchoir also helps in training for honor choirs, both regional and national. A lot of the girls also go on to be members of the All State Choir as well, and some study music and participate in choir groups at the collegiate level.

"We want to provide a good place for girls to shine and express themselves artistically," Rodenmeyer says.

"Singing makes you feel good, and Scott and the staff provides that space. They do a great job of it."

The Mississippi Girlchoir is looking for more girls to be a part of their choirs, as well as more students to participate in Treble Song.

"The joy of coming together as a group is just a lot different than singing alone," Rodenmeyer says.

"It's very valuable because there is a lot of skill-building with that experience. The repertoire that Scott and his staff pick, you don't hear it anywhere else. He has such a vast knowledge of world music"

Auditions are in August and January of every year. Tuition for the year is $600 for the training choir and $850 for the Bel Canto choir. Mississippi Girlchoir also offers scholarships and payment plans for those interested. For more information, find the Mississippi Girlchoir on Facebook or visit msgirlchoir.org.