OPINION: Tuning in to Tate Television 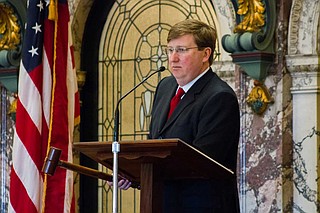 “Tate Reeves is dead-set against insuring uninsured Mississippians. Why is he opposed to ‘Obamacare expansion’? Reeves won’t give a reason. Photo by Stephen Wilson. 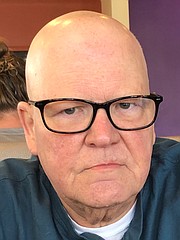 Lt. Gov. Tate Reeves appears headed for a promotion. He's the front-runner for Mississippi's next governor this fall.

Reeves leads all candidates in the most important measure in politics: money. The Republican's campaign started June with $6.3 million on hand, far ahead of any of his rivals. And he's already put that money to work with television ads. His commercials have flooded local television news programs in the last few weeks. His current or potential opponents have been little seen.

One of Reeves' latest commercials purports to take a look inside the Reeves family household. No doubt focus groups loved this miniature episode of "Father Knows Best."

The only thing the commercials are missing is a cute pet.

Reeves' wife, Elee, narrates this folksy TV ad. We are told that the two oldest Reeves daughters are competitive, just like their father. We also learn that the youngest daughter is nice and gets up early, like her father, so they can spend daddy-daughter time together.

We're also told that raising three daughters has sharpened Reeves' negotiating skills and will benefit him when he has to negotiate as governor.

As the father of two daughters, I agree that dealing with a household of women can involve much back and forth. But if Reeves ever has to negotiate as governor, the person he's negotiating with won't be worried that he might take away her or his cellphone or car keys.

So far, Reeves' ads have only mentioned one opponent: his likely Democratic foe in the general election, Attorney General Jim Hood. In two ads, Reeves tries to contrast himself with Hood. He says Mississippi needs a governor "strong enough" to keep reforming schools; keep the state economy moving in the right direction; and "stand up" to "coastal elites" who want to restrict Mississippians' religion to church or allow abortion until birth.

"He won't. I will," Reeves intones in the commercials.

I'll have to take his word for it. I missed Hood's anti-education, anti- business, anti-religion, pro-anything-goes-on-abortion speech. I also can't remember what these last two "issues" have to do with governing the state.

The Republican's commercials don't mention whether Reeves will be "strong enough" to ban R-rated movies, fishing on Sunday or the designated hitter in baseball. Maybe he is saving that for his stump speech.

I've heard complaints that Reeves' TV ads don't say anything about how he plans to govern the state. The lack of details is no surprise. Most front-runners prefer to avoid specifics and debates as much as possible. Instead, Reeves will stick to the talking points that pander to his Tea Party brand of conservative Republicanism.

I don't need a TV ad to know how Reeves will govern Mississippi if he's elected. You will see more of what you've seen from current Gov. Phil Bryant.

You will see Reeves continue to oppose maintaining Mississippi's infrastructure by refusing even a minimal increase of the state's fuel tax. This in spite of the fact that the fuel tax hasn't changed since 1987 and is one of the lowest in the nation. In that time, the State department of transportation says the amount of travel on state-maintained roads has doubled.

The money will come from the $1 billion over the next five years that the Legislature earmarked for roads in 2018, he says. The money is supposed to come from an Internet sales tax and the state lottery that's yet to sell its first ticket. Never mind that the tax and lottery are unlikely to produce that much money any time soon. And the state would still need billions more to fix its roads and bridges.

The presumptive governor also won't support Medicaid expansion, despite the fact that it would bring in up to a billion dollars to boost Mississippi health care.

Reeves is dead-set against insuring uninsured Mississippians. Why is he opposed to "Obamacare expansion"? Lately, Reeves won't give a reason. He's just against it.

Here's the bad news about Reeves' TV ads: There are many more to come.

Charles Corder is a longtime editor and writer for newspapers in Mississippi, Georgia, Louisiana and Tennessee. Contact him at [email protected].