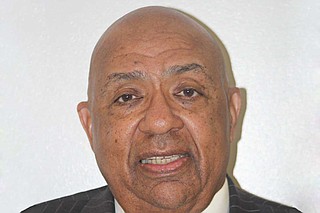 Though James Coleman is stepping down as athletic director for Tougaloo College, he is merely just slowing down a little, he says. Coleman has spent the last 33 years as AD for Tougaloo in a career that spans 56 years in higher education.

Coleman's longtime association with Tougaloo began as a student-athlete. He was a three-sport participant in football, basketball and track at the college from 1957 to 1961, and it was his time as an athlete at the college that set his course for his life's work.

"I was a Jackson Public (Schools) product and went to Tougaloo as a pre-med major and to play sports," he told the Jackson Free Press. "The coaches there did more than just coach. Being part of a small private school, you have to wear many hats. "It fit my (philosophy) to transform and prepare students on the field and in the classroom for their professional and private lives to prepare them to be servant leaders."

Coleman earned his bachelor's degrees in health and physical education from Tougaloo in 1961 but didn't jump right into his career in education. He spent time as a member of the Harlem Magicians, which former Harlem Globetrotter Marques Hayes founded in 1953 after he left the Globetrotters, from 1961 to 1962.

"We would play two games during our tours around the South," Coleman said. "We would (play) a game for a white crowd and then a game for the black crowd. We had two different shows."

He returned to Tougaloo in 1962 after receiving job offers from Dillard University in New Orleans and from Tougaloo. Ultimately, he chose the Jackson-based college.

While at Tougaloo, he coached track and field, was an assistant coach in basketball, and worked as a health and physical education instructor. He then earned a master's degree in education in 1963 from Tennessee State University.

He then became the athletic director at Mississippi Valley State University from 1982 to 1984. It was there that he hired a successful high school basketball coach named Lafayette Stribling as head coach in 1983. Then, he hired him as head basketball coach at Tougaloo in 2005.

He served as chairman of District 30 of the National Association of Intercollegiate Athletics from 1979 to 1982. Of the 32 districts in NAIA, he was the only Afirican American to serve as district chair at the time.

During his time as athletic director at Tougaloo, he brought back women's basketball, golf and baseball. The school added volleyball and briefly added softball until fielding players became an issue. Coleman is also helping the school explore bringing back track and field and soccer.

His decision to step down came in part when he began to realize that he would see fewer of his longtime peers at conventions and conference meetings.

"I have taken the program as far as I can," he said. "It is time to move on and bring in someone new."