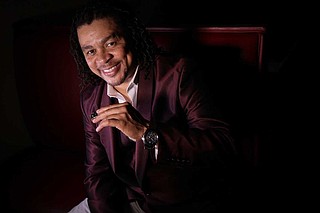 When Grady Champion talked to the Jackson Free Press midafternoon in June, his voice seemed slightly weary after traveling around North America, from New Mexico to Chicago, to promote his new album, “Steppin’ In: A Tribute to ZZ Hill,” which honors the blues legend ZZ Hill.

After a performance at the Mississippi Civil Rights Museum on June 4, Champion is preparing for another one at the Jackson Music Awards on July 15, where he will play alongside other musicians such as Bobby Rush and Champion’s personal friend, Eddie Cotton.

After more than 26 years of performing, it is the universality of blues that draws Champion into his genre the most, he says. The idea of getting through struggle fascinates him.

“I’ve experienced that heat (of manual labor in Mississippi),” he says. “These songs were born out of people on plantations just trying to make it through the days. I’ve been there, with the heat of the tractor engine hitting your face as you walk down the road with the sun beating down on your neck. It’s hard, and I think that is what makes the music so endearing.”

Champion was born in Canton, Miss., in 1969. He discovered his love for music after joining his church choir at age 8. He and his family moved to Miami when he was 15 but then moved back to Mississippi, where he graduated from Canton High School in 1987.

Champion began his career in Miami in the 1980s, first as a promoter for rap label Sun Town Records and then as a rapper who performed under the moniker MC Gold. In his brief career as a rapper, he found that he had a natural talent for blues music.

“I fell in love with performing while doing promotion for Sun Town Records, but I was 19 and had a kid, (and) everyone there wanted to be a gangster rapper, so I made a decision,” he says. “I needed to get into a more mature type of music.”

Heeding the advice of his mother and friends, Champion moved back to Mississippi in the late 2002 and pursued a career in blues music after friend Rachelle Coba told him about the “Lynn Pace Blues Hour,” a radio show that featured “Chess (Records)-type artists,” Champion says.

In the mid-’90s Champion remembers being one of the few young blues artists in Jackson, along with Eddie Cotton.

“We’d play these clubs, and they’d just be so packed like the floor was about to fall out,” he says. “I remember we did a live recording in 2007 at the (930 Blues Café in Jackson, Mississippi). That crowd was unbelievable. I sometimes think about what could have been in Miami, how I could have been a successful rapper … I think I made the right decision.”

In the years, Champion has been all over the world playing his music, including in places like Tel-Aviv, Israel.

Most recently, Champion began his tour of “Steppin’ In.” This recording process was special to Champion because, while recording at Malaco, he got to record some of the ZZ Hill hits that his mom used to listen to while she would quilt under a tree in the front yard.

“We weren’t looking for the hits because they were right there,” he says. “It was unbelievable because everyone knew exactly what was going on the minute we stepped into the studio. Now we’re being played on three major radio stations at a time and travelling all over to promote the record. At the Jackson Music Awards, I’ll be playing two songs off of the album in front of my peers, which is of course the biggest honor.”