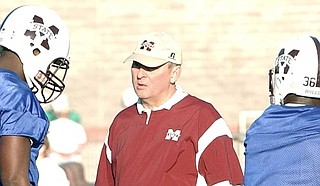 While growing up in Jackson, Tenn., Rockey Felker often spent his Saturdays listening to Mississippi State University football, a story from MSU's The Reflector says. It started a love for MSU that Felker carries to this day as he continues to work for the university.

Felker earned a letter in five sports while attending Brownsville High School in Brownsville, Tenn., and he earned All-State honors while there. His father, Edwin "Babe" Felker was assistant coach for the football team. 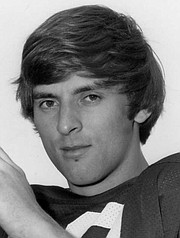 Three SEC schools offered Felker a scholarship. One of them was MSU. Felker arrived at Mississippi State in December 1970. He played quarterback for the freshman team in 1971. Under NCAA rules, freshmen weren't allowed to play on the varsity team until 1972.

In his first season with the varsity in 1972, Felker threw for 992 yards with six touchdowns and 11 interceptions. He rushed for 97 yards and two touchdowns. MSU did not have much success on the field, finishing 4-7 on the season.

In 1973, the quarterback threw for 782 yards with nine touchdowns and eight interceptions and rushed for 272 yards and three touchdowns. Again, the Bulldogs didn't win much, and the team finished with a 4-5-2 record.

Everything clicked for Felker and the Bulldogs in the 1974 season. The senior quarterback threw for 1,147 yards with eight touchdowns and eight interceptions and 446 yards rushing with seven touchdowns.

MSU finished the season 9-3 and defeated the University of North Carolina in the Sun Bowl. As a result of his efforts, Felker became Nashville Banner's SEC Player of the Year and Birmingham Post-Herald's Outstanding Senior Player.

The Cincinnati Bengals drafted Felker as a defensive back in the 10th round with the 245th pick; however, instead of playing professional football, he decided to go into coaching college football.

Felker began his coaching career as junior varsity, running back and wide receivers coach at Mississippi State from 1975 to 1978. His next stop was Texas Tech University as an assistant coach for the 1979 and 1980 seasons.

Felker then got the opportunity to return home. At age 33, he became the youngest head coach in the nation when he came back to Mississippi State to be the head coach in 1986.

It was a magical first season for the Bulldogs and Felker in his first season on the job. MSU started the season 6-1 before dropping in the final four games, finishing 6-5. Felker was the first coach to finish with a winning season in year one at MSU since Darrell Royal.

The Bulldogs did not repeat the success of that first season, as the team finished the 1987 season 4-7. The MSU program ended up bottoming out in 1988 with a 1-10 record.

MSU finished the 1989 and 1990 season with a 5-6 record in both seasons. The university fired Felker after the 1990 season, replacing him with Jackie Sherrill.

In 2002, Felker returned to MSU as coordinator of football operations, which he did until 2006. He returned to coaching as running backs coach from 2008 to 2009, when he became the director of player personnel.