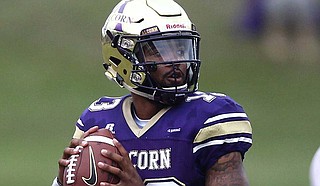 Alcorn State University has dominated the SWAC East division over the last five seasons. The Braves have won five straight division titles and three out of the last five conference championship games.

If the other teams in the division are looking for Alcorn State to slip, this might not be the season. At SWAC Media Day on Tuesday, July 16, the Braves were the overwhelming favorite to win the East again. ASU gathered 92 points from the league's head coaches and sports information directors.

The Braves' talent level was on full display when the conference announced the Preseason First and Second Team All-SWAC teams. ASU led all conference schools, with 14 players landing on either First or Second Team. Prairie View A&M University is second with eight players on either team.

Leading Alcorn State into the season is SWAC Preseason Offensive Player of the Year quarterback Noah Johnson. The quarterback is also the SWAC Preseason First Team All-SWAC choice of the head coaches and sports information directors.

The Tampa, Fla., native enjoyed career-highs in just about every statistical category by the time the 2018 season ended. He enters his redshirt season as No. 8 in touchdown passes with 30, No. 9 in passing yards with 4,018 yards and No. 10 in rushing yards with 1,867.

He received the titles of 2018 SWAC Offensive Player of the Year, 2018 SWAC Championship Offensive MVP and 2018 First-Team All-SWAC. Johnson was one of the four finalists for the 2018 Conerly Trophy and the HBCU Player of the Year Award, and he finished in the top 25 for the Walter Payton Award.

Johnson had a slow start to his career, as he redshirted the 2015 season because he was coming out of high school. In the 2016 season, he played in nine games, passing for 1,116 yards with 11 touchdowns and five interceptions. He added 440 yards rushing, including 10 scores rushing.

In just six games during the 2017 season, Johnson passed for just 782 yards with four touchdowns and four interceptions. He was limited on the ground to just 333 yards and six touchdowns.

The conference selected Kicker Corey McCullough to the First-Team All-SWAC for special teams. He also got on the Second-Team All-SWAC as a punter.

ASU will open the 2019 season on the road against the University of Southern Mississippi, with the game kicking off at 6 p.m. on Saturday, Aug. 31.