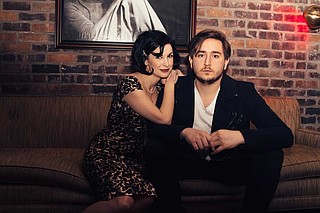 Stephanie Adlington and Aaron Lessard will perform at Duling Hall on Friday, July 26. The doors open at 6 p.m., and the show begins at 8 p.m. The cover charge is $10. Photo courtesy Southern Siren Entertainment

When Aaron Lessard visited Nashville four years ago, he noticed that its current music market is one of the only ones in the country that still focuses on musicianship as opposed to production.

"I think Nashville right now is still, even in the larger grand scheme of things in terms of larger acts and even the ... country stuff, it's still focused on real instruments, and it's still focused around songwriting and musicianship," he says.

The city also still kept its small-town feel, he says. He decided to move there two years ago, and that is where his next project began.

In 2017, Lessard met Stephanie Adlington, a singer and songwriter known as "The Siren of the South" and pioneer of "jazzicana," a genre that infuses, jazz, blues and storytelling.

Adlington needed a new guitar player, and a mutual friend connected her to Lessard, whose music fuses roots rock with genres such as rockabilly, jazz and blues. The two bonded over their shared love of vintage music.

"We were just kind of instant friends," Adlington says. "We just hit it off."

They also began to vent to each other about issues like the difficulties of touring with three or more people, Lessard says.

They started playing shows together in October 2018 and after seeing a positive audience response, they started working together as a duo. About three weeks ago, Lessard and Adlington launched themselves as A Tale of Two.

In doing some of the promotion for past shows, the two noticed how long their names were when combined, and they decided they need an official name for the project, Lessard says.

"I really wanted to play on the idea of it being the two of us," he says.

At first, they wanted to come up with names that would play to some of the storytelling elements, like Prohibition Tale, or something with southern slang from that era. Then Adlington suggested "A Tale of Two." Lessard, who has graphic design experience, sat down and began playing with the name.

"I just put it on paper and looked at it and was like, 'This just looks good,' and it's short and it's concise, and the alliteration and everything tied together with it, and I think it really sums up what it is," he says. "I said, 'This just makes sense, and I think it's perfect.'"

Adlington liked it because it was a tale of both of them and their styles and musical backgrounds.

"I hope that comes across instead of it looking like two separate shows," she says.

Lessard says their music in the project mixes elements of Americana duo The Civil Wars and The White Stripes. Adlington also brought her love for gothic and southern literature into the project.

They like to put a heavy emphasis on stories from the Prohibition Era.

"A lot of our show is kind of a love song to southern lifestyle and culture," he says. "It's a lot of that style."

For the Duling Hall show, Adlington and Lessard will perform their own songs, ones they've written together, and covers, though they might sound a little different, Lessard says.

"Really to try and re-engage people and create some familiarity with the show, we've added in some covers that we have done some really creative arrangements to," he says.

For the covers, they take contemporary music, such as "Sea of Love" by Tom Waits, and add southern elements to them.

"It's kind of all that tied in together," he says.