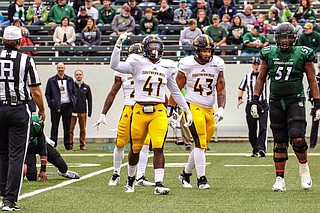 Conference USA held its football media days in Frisco, Texas, from Wednesday, July 17, to Thursday, July 18. The league members and the media met to discuss the upcoming season and vote on all conference teams and order of finish.

This season, Boothe could become the next defensive star at USM. If he has a sensational year, he could follow in the footsteps of former Golden Eagle linebacker Jamie Collins Sr., who won a Super Bowl with the New England Patriots.

Boothe and the defense were the strength of the team last season. If the USM offense does not get going again this season, it will be up to the linebacker star to lead his defense to help the team find ways to victory.

The Bassfield, Miss., native, came to USM as a three-star recruit by 24/7sports.com. As a senior in high school in 2015, he made 101 tackles with 12 tackles for a loss, 18 quarterback hurries and six sacks. He forced two fumbles and recovered two.

He redshirted at USM for the 2016 season and then hit the field in 2017 as a redshirt freshman, playing in 13 games for USM. The linebacker recorded 79 total tackles, 28 solo ones and nine for a loss, three sacks, one pass defended and one fumble recovery.

His efforts earned him Conference USA All-Freshman Team for the 2017 season. In a 43-34 win over Rice University, C-USA named him the Defensive Player of the Week, as he made a season-high 14 tackles.

In the 2018 season, Boothe made 47 total tackles and 31 solo ones, 10 sacks, three passes defended and two forced fumbles. He earned Honorable Mention recognition from the league for his play.

At the beginning of this season, Boothe earned Preseason All-Conference USA. Defensive linemen DeMarrio Smith and Jacques Turner and defensive back Ky'el Hemby join him. USM placed the most players on the defensive team with four players.

USM wide receiver Quez Watkins is the only offensive player to earn Preseason All-Conference USA. Southern Miss and the University of North Texas tied with five players on the preseason conference teams.

C-USA predicts that North Texas will finish ahead of Southern Miss in the West Division. If Boothe and the rest of the defense play up to their 2018 level, USM could end up at the top of the division.

CORRECTION: A previous version of this story described Jordan Mitchell as a tight end for USM. He is a wide receiver. We apologize for the error.