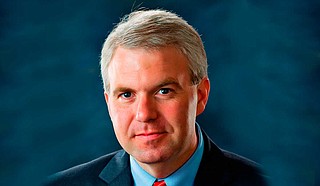 Public Service Commission President Brandon Presley, a Democrat representing the state's northern district who is unopposed for reelection, said he hoped the move would cut down on calls from "dubious" charities. Photo courtesy Brandon Presley

JACKSON, Miss. (AP) — Officials on Monday reminded charities that hire telemarketers to seek new donors that they now have to register under Mississippi's no-call law.

Beginning July 1, charities that use paid telephone solicitors to prospect for new donors could be fined $10,000 per violation if they don't register in Mississippi and allow people to opt out of telemarketing calls.

Until now, all charities have been exempt from the rules. Under a law passed earlier this year, though, only charities that are contacting existing donors, or who are making phone calls with volunteers will be exempt.

Senate Bill 2744 also allows businesses to register for the state's no-call list, which is supposed to protect from unwanted telemarketing calls. Until now, only individuals could register. The new law also makes it illegal to cause a fake number to display on caller identification, a practice known as spoofing.

Public Service Commission President Brandon Presley, a Democrat representing the state's northern district who is unopposed for reelection, said he hoped the move would cut down on calls from "dubious" charities.

"Frankly, that's where 99% of our complaints come from," Presley said during a news conference Monday.

Presley and Public Service Commissioner Sam Britton said it's often difficult for the state to enforce the law or collect fines.

"It does work, but it is only the law-abiding companies that follow the law," said Britton, a Republican representing the southern district who is running for secretary of state.

Presley said civil lawsuits that can be filed under the law can put illegal telemarketers out of business.

Secretary of State Delbert Hosemann, a Republican running for lieutenant governor, said more than 4,000 charities are registered with his office. He said his office has revoked licensed of 125 groups that officials found were not truly nonprofit groups.