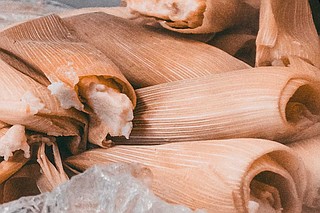 “(Hot tamales) are a unique manifestation exemplifying the sort of diversity that makes Mississippi what it is.” Photo by Dennis Schrader on Unsplash

"The best hot tamales are at the donut shop," my uncle once said to me. I won't argue as to the veracity of this quote or attempt to pit one purveyor versus another. Fortunately, in the realm of the Delta-style hot tamale, I have never found myself eating one of a less than desirable quality. Whenever I am back home in Mississippi, I make a point of grabbing hot tamales at Solly's in Vicksburg. Publications have written about Solly's numerous times, and it is certainly one of the more lauded hot tamale shops outside the confines of the Delta, albeit ever so slightly to the southern edge. However, always on the periphery, are the hot tamales that doughnut shops serve.

In Vicksburg, Divine Donuts serves hot tamales that are delicious in their own right. The Donut Shop in Natchez, which my uncle was referring to in his quote, was even on the Southern Foodways Hot Tamale Trail Map. But it's still easy to disregard the tamales one finds at a donut shop, which are rarely advertised by anything more than a teeny-tiny sign in the corner of a window, because they seem like more of an afterthought.

These sentiments are perfectly rational, but in the context of Mississippi, one must check rationale at the door. For a state that steeps in contradictions and mythology, seeking the expected simply won't do.

To this day, my favorite place to get doughnuts is still the Donut Shop in Natchez. As a kid, we would grab a dozen glazed before going out to Lake St. John. While the treat's origins are not southern, deep fried-dough is at least southern in spirit. The South's proclivity for sweets is no secret. It's easiest to blame the region's sweet tooth on the French decadence, but the addition of a spicy, greasy mixture of meat inside cornmeal to a menu of sugary breakfast items was a confluence of the Mississippian palate.

The tamale comes in many different forms and has roots in the Maya and the Aztec cultures. For all intents and purposes, it is a dish native to the Americas. Numerous variations exist in Mexico, Guatemala,  Nicaragua and many other countries in Central and South America. Most tamales are corn-based and steamed with a variety of fillings wrapped in husks or leaves. They vary wildly in size and flavor. The majority are savory and contain meat, while others are sweet and contain fruits like strawberries or pineapple.

Then there is the spicy, skinny Mississippi Delta hot tamale. The hot tamale displays a combination of cultures including Native American, Mexican and  African American. It is a unique manifestation exemplifying the sort of diversity that makes Mississippi what it is. Certainly a cuisine of which every Mississippian should be proud.

Whether a local is in the mood for something spicy and something sweet or a tourist is in search of what makes Mississippi special, I implore all to answer the beckoning call of the little sign in the corner of the window and experience this unique combination. Doughnut shops that serve hot tamales in Mississippi also include Honest Abe's Donuts in Greenwood, Scarlet's Donuts in Tupelo and others. I know the hot tamales at the donut shops back home in Mississippi are good, and it's the reason why, when craving a tamale in Los Angeles, I'll pull up Yelp and instinctively type in "donuts."