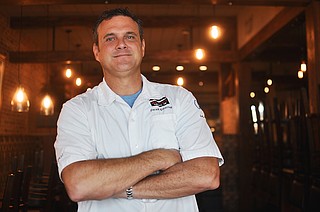 Chef Derek Emerson is the co-owner of Walker's Drive-In and is also an owner/operator at Local 463 Urban Kitchen, Parlor Market and The Capital Club. Photo by Devna Bose

The following is a verbatim press release from Renaissance at Colony Park:

Ridgeland, MS, (March 18, 2019) - Renaissance at Colony Park is pleased to announce that the Seafood R'evolution restaurant space will transition to the restaurant group of Derek and Jennifer Emerson on March 31st. The changeover requires a new ABC license, which can take 4-6 weeks. During this time, the restaurant will be closed, and the new team will do some interior refreshing to the space. Many of the Emerson's current employees will make a move to the new restaurant, and they will interview Seafood R'evolution employees who have an interest in working with them.

The restaurant will reopen as CAET, with a new menu to be developed by Chef Derek Emerson, which will remain seafood centric. "We believe in our concept and just need to grow it." CAET will expand from 2,000 square feet to 10,000, utilizing the oyster bar infrastructure already in place at Renaissance. They'll offer 8-10 types of oysters and other seafood items, along with their small plates and wine menu. Derek calls it "a good marriage of two concepts."

The restaurant will become an exciting addition to the Emerson's group of high-end and successful restaurants in the Jackson area. The current owners of Seafood R'evolution are pleased to place this beautiful restaurant in their capable hands and that it will continue under local ownership. Renaissance at Colony Park, is delighted to have this concept as a part of their restaurant lineup and to enjoy another partnership with the Emersons.

Jennifer Emerson, says that they will continue to utilize the beautiful main dining room as a premier fine dining destination. The many adjoining rooms provide diverse options for private parties and meetings. They will expand their casual offerings with a new lunch menu which will allow area professionals to enjoy a delicious meal in a hurry, and they will create a fun bar, lounge and outdoor patio atmosphere, which is sure to become a favorite local stop.

Derek and Jennifer Emerson began their restaurant ownership career together with Walker's Drive-In, and also currently own and/or operate Local 463 Urban Kitchen, also at Renaissance, Parlor Market and The Capital Club.