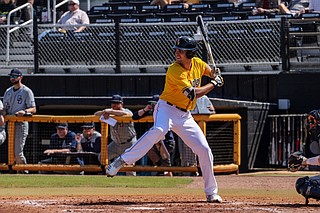 The Division I college baseball regular season comes to a close this weekend. There is still plenty to play for a few teams, and it is the last chance for the five finalists for this year's Ferriss Trophy to make an impression.

University of Southern Mississippi outfielder Matt Wallner, a Preseason Conference USA Player of the Year and finalist for the Ferriss Trophy, and his team have plenty to play for this weekend. USM is currently tied with Florida Atlantic University for first place in Conference USA.

Last weekend, FAU swept the Golden Eagles in a three-game series, setting up a dramatic finish at the end of the season. USM will need Wallner to have a big weekend.

Southern Miss faces the last-place team in C-USA, University of Alabama, Birmingham at the end of the regular season, and FAU is facing Middle Tennessee State University, which currently sits in 10th place in the 12-team conference. If USM and FAU finish tied, the Owls will enter the conference tournament next week as the top seed.

Outfielder Wallner is having a solid junior season, as he is batting a .293 average and has started all 50 games for the Golden Eagles this season. He leads USM with a .585 slugging percentage and heads into the final series with 55 hits, 45 RBI, 43 runs, 15 home runs and 10 doubles.

The Forest Lake, Minn., native entered the season as a Preseason All-American from Collegiate Baseball, Baseball America and Perfect Game D1 Baseball. In the fall, he was named to the Athletic Director's Honor Roll.

Wallner is the only USM player to become a finalist for Ferriss Trophy. Two Mississippi State University players, outfielder Jake Mangum, a three-time finalist, and pitcher Ethan Small, and two players from the University of Mississippi, third baseman Tyler Keenan and shortstop Grae Kessinger, join him.

Fans can vote for the player they believe to be the best of the five finalists at cspire.com/ferriss. Those votes will count for 10 % of the overall total. The final 90 % will come from Major League Baseball scouts and Mississippi college baseball coaches. Fan voting lasts until noon on Saturday, May 18.

Tickets for the trophy presentation at the Mississippi Sports Hall of Fame & Museum are on sale and range from $35 to $350. For more information or to purchase tickets, call the MSHOF offices at 601-982-8264, stop by at 1152 Lakeland Drive in Jackson or go online at http://msfame.com/c-spire-ferriss-trophy/.