Band of the Day: RAM 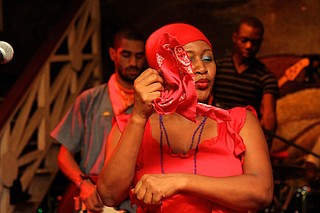 RAM performs at Duling Hall on Sunday, May 19. Photo by Nadia Todres

People often refer to music as the universal language bridging the gap between cultures and breaking down communication barriers. Rhythms speak to people regardless of where they're from, and that rhythm is the driving force behind Haitian dance music band RAM, says founder Richard A. Morse.

"We're a dance band," he says. "Our main goal is to get people up and moving at our concerts. ... Even if you don't know the history of the music, it'll still make you move you move your feet."

The band, which is based in Port-au-Prince, Haiti, gets its name from Morse's initials. They play a style of music called mizik rasin, or roots music, which combines elements of Haitian music traditions with Western music genres such as rock 'n' roll. RAM began performing in 1990 and recorded their first album in 1996.

Morse was born in Puerto Rico and grew up in Connecticut, where his father, Richard, is from. Morse's Haitian roots come from the maternal side of his family. His mother, Emerante de Predines, was the first Haitian singer to sign a recording contract.

"Throughout my childhood my mother would always sing me traditional songs from Haiti and teach me about the rhythms that had been passed through generations of Haitian people," he says. "I was fascinated by them, and it helped (me) gain an interest in music."

He graduated from Princeton University with a bachelor's degree in anthropology in 1979. While attending school there, he joined New Wave punk band The Groceries. The band broke up in the early '80s, and in 1985, Morse moved to Haiti, "in search of the rhythms that had inspired me as a child," he says.

Morse initially had issues joining the country's music scene because he was not a native, he says. This changed when he met his wife Lunise, who is a vocalist for RAM.

"When I first came to Haiti, I wasn't able to venture into the music the way I wanted because I was seen as an outsider," he says. "I met my wife while she was performing with a dance troupe and later became a drummer for them. She was the key to me finding the rhythms that I had searched so long for."

Ancient West African rhythms are an integral part of the Hatian soundscape, Morse says, and the music is also connected to the U.S., specifically New Orleans. African slaves brought the rhythms to Haiti. After the country gained its independence around 1809, about 10,000 Haitians moved to New Orleans, doubling the city's population, and infusing the city with more culture and traditions.

"The 'Second Line' culture found in NOLA is actually derived from a similar Haitian custom in which musicians marched through the streets playing the handmade rara horns," Morse says.

The Haitian rhythms also helped create the foundation for jazz and even blues, he says. "They innovated on the sound by adding that signature swing."

They embarked on their latest tour in support of their newest record, "August 1791," this week and play at Duling Hall (622 Duling Ave.) on Sunday, May 19. Tickets are $10 in advance or $15 on the day of the show. The show starts at 7:30 p.m. For more information, find the band on Facebook or visit ramhaiti.com.