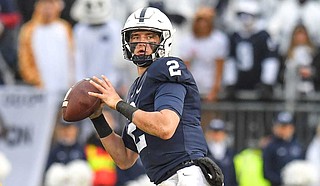 College athletes are using a rule the NCAA passed in 2006 that allows players who have graduated to transfer to a different college team. One player to take advantage is former Pennsylvania State University quarterback Tommy Stevens. The former Nittany Lion was backup for one of the best quarterbacks in PSU history, Trace McSorley.

In some minds, Stevens looked to be the heir-apparent to the Penn State quarterback job, but Head Coach James Franklin did not name him the starter after spring practice. Stevens was locked in a battle with junior quarterback Sean Clifford, but he had options.

Stevens took trips in early May to the University of Illinois, the University of Kentucky, Miami University in Ohio and Mississippi State University. Then, he announced on Twitter on Friday, May 17, that he would transfer to MSU and rejoin his former Penn State offensive coordinator Joe Moorhead.

During his three years at PSU, Stevens' passing stats were not outstanding since he was sitting behind McSorley. After redshirting in the 2015 season, he hit the field for the first time in 2016 and saw action in seven games, completing two out of three passing attempts for 36 yards.

As a redshirt sophomore, he saw action in nine games and threw the most passes of his PSU career with 27 attempts and 14 completions for 158 yards and three touchdowns. While hampered with an injury in 2018, he appeared in just seven games, going eight-for-11 in passing for 110 yards with a touchdown and interception.

In three seasons, Stevens completed 24 of 41 passses for 304 yards with four touchdowns and one interception. That is a small sample size to offer a graduate transfer a spot on the team without seeing the whole picture.

The Indianapolis, Ind., native's athletic ability impressed Moorhead enough for him to scheme ways to get Stevens on the field. As a freshman, Stevens ran for 198 yards on 21 carries with two touchdowns. He earned 27 carries in 2017 for 190 yards and four touchdowns. During his final season at PSU, he rushed for 118 yards on 28 attempts for two touchdowns.

He rushed for 506 yards on 76 carries with eight touchdowns over his three seasons at PSU. The team used him as a receiver in the 2017 season, as he caught 12 passes for 60 yards and two touchdowns, and in 2018 as he caught two passes for two yards.

Penn State even created the "Lion" position for Stevens in 2018 as a way to get him more involved in the offense. The 6-foot, 5-inch, 240-pound quarterback is able to cause matchup problems for defenses when he isn't playing his original position.

Stevens should battle junior Keytaon Thompson for the starting job come this fall. Thompson hopes to replace former Bulldog quarterback Nick Fitzgerald but did not win the job in the spring over the other quarterbacks.

Moorhead comes out the big winner since Stevens announced he was coming to MSU. The Bulldog head coach gets a player who knows his scheme well. Even if Stevens doesn't win the starting job, Moorhead has a player with experience to bring into a game or start games if the starter becomes injured.