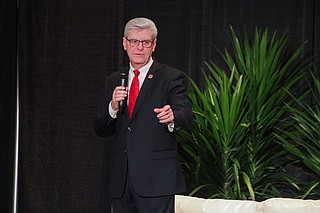 State law limits the governor and lieutenant governor to two terms each, and Republican Gov. Phil Bryant is moving on after a long career in state government. Photo by Stephen Wilson

JACKSON, Miss. (AP) — No matter who wins this year's elections, Mississippi will have its biggest turnover of state government officials in a long time.

At least five of the eight statewide offices will have new occupants. Those are governor, lieutenant governor, attorney general, secretary of state and treasurer.

That is a contrast to 2015, when all eight statewide officials — the three above, plus auditor, agriculture commissioner and insurance commissioner — were re-elected.

State law limits the governor and lieutenant governor to two terms each, and Republican Gov. Phil Bryant is moving on after a long career in state government.

State law also limits the lieutenant governor to two terms, so Reeves would be moving out of that job even if he weren't running for governor. The lieutenant governor's race is between three-term Secretary of State Delbert Hosemann, who's a Republican, and one-term state Rep. Jay Hughes, who's a Democrat.

The race for secretary of state is between Republican state Sen. Michael Watson and Democratic former Hattiesburg Mayor Johnny DuPree.

Hood is wrapping up his fourth term as attorney general. Those running to succeed him as the state's top legal officer are Republican Lynn Fitch, who's finishing her second term as state treasurer, and Democrat Jennifer Riley Collins, a military veteran and former executive director of the American Civil Liberties Union of Mississippi.

Fitch's decision to seek another office after two terms leaves an opening for treasurer. That race is between Republican David McRae, who manages his family's investment company, and Democrat Addie Lee Green, who is a former alderwoman in Bolton. McRae unsuccessfully challenged Fitch in the 2015 Republican primary. Green has unsuccessfully run twice for public service commissioner and once for agriculture commissioner.

Republican Mike Chaney is seeking his fourth term as insurance commissioner and is challenged by Democrat Robert Amos, who does private job training.

Republican Andy Gipson was appointed agriculture commissioner by Bryant in the spring of 2018, after the governor moved Republican Cindy Hyde-Smith from commissioner to U.S. senator. Gipson is an attorney and former state representative. He's challenged Tuesday by Democrat Rickey Cole, a farmer and ex-chairman of the state Democratic Party.

The only statewide official guaranteed a new term is Auditor Shad White, a Republican who is unopposed. White was appointed to the job by Bryant in July 2018, when Republican Stacey Pickering stepped down and became director of the Mississippi Veterans Affairs Board.

The Mississippi House and Senate will also have new people as second in command when the new term begins in January.

House Speaker Pro Tempore Greg Snowden of Meridian was defeated in the Republican primary in August, and Senate President Pro Tempore Gray Tollison, a Republican from Oxford, did not seek another term in the Senate. New pro tems will be elected in each chamber, with votes from the 122 House members and 52 senators.

The new lieutenant governor will preside over the Senate. Republican Philip Gunn appears to be on track for a third term as speaker of the House.

The speaker and the lieutenant governor have broad power to decide which legislative proposals live or die. They appoint committee members, choose committee chairmen and assign bills to committees for consideration.