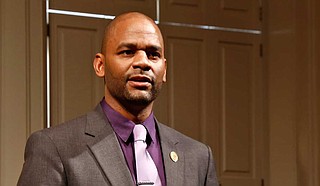 During an Oct. 28 meeting, city officials discussed rolling out a "minimum-service charge" of $63.27 for water service for residents who currently do not receive water bills. Ward 4 Councilman De'Keither Stamps praised the plan, which he called "fair." Photo by Imani Khayyam.

City of Jackson officials met last week to discuss a temporary solution to Jackson's ongoing water-sewer billing problems. As the City continues to devise ways to fix its water-billing system, customers who currently do not receive bills will pay a monthly "minimum-service charge" of $63.27 for water, sewer, and sanitation, officials said.

The plan is a response to ongoing complaints from customers who say they are not receiving water bills. More than 11,500 people are not receiving water bills because of faulty meter readings, Director of Public Works Bob Miller told WLBT after the Oct. 28 meeting. Those who are receiving bills continue to report exorbitant and inaccurate numbers. The City has shut off the water of many Jacksonians for non-payment.

Thousands of unpaid bills have accrued since 2013, when Siemens Inc. and local subcontractors carried out botched work to upgrade the City's water-sewer system, replace its water meters and implement a new water-billing collections system, a lawsuit the City filed in June alleges. The City has not been able to collect nearly $50 million in bills, Miller told reporters earlier last month, and Jackson has suffered a total of $225 million in losses since entering into the contract with Siemens, the lawsuit states. In it, the City of Jackson accuses defendants of "massive fraud orchestrated by Siemens" and details more than 60,000 faulty water-meter installations, costing the City approximately $2 million in unpaid water bills each month.

Ward 4 Councilman De'Keither Stamps praised the flat-rate plan, which will go into effect as early as this month.

"I think that's fair," he told the Jackson Free Press in a phone call today. "We've been suggesting that for years," he continued, adding that "If you can just make up a number... I'm sure you can give me a baseline number so that people can have something they can depend on until we work this stuff out. Because people need to have something stable so they can budget properly."

Stamps is on the ballot today as the Democratic nominee in the race for public service commissioner of Mississippi's central district.

Previously non-billed customers with 5/8" meters will soon receive the flat rate bill with the following notice: “Metered usage amount was not available at this time. Usage was estimated at 13.3672 cubic feet per day or 100 gallons per day. When metered usage data becomes available, any usage less than this amount will be credited to your account."

Residents who have questions or concerns about water-billing can visit the Jackson Water Sewer Business Administration office or call 601-960-0247. The office was temporarily closed last Friday due to a plumbing emergency, but has reopened as of this week.

The Jackson City Council also approved Mayor Chokwe A. Lumumba's plan to submit an application for the City's own U.S. Department of Agriculture license to exhibit animals at the Jackson Zoo.

Ward 1 Councilman Ashby Foote, along with Stamps of Ward 4, voted against the measure in the 3-to-2 vote.

The zoo has been closed since Sept. 30 as it has been waiting for its new operator, the Dubai-based ZoOceanarium Group, to receive its operating license from the USDA. Obtaining the license could take months, even though it was set to take over zoo management on Oct. 1.

Lumumba addressed reporters after the council's vote. "This is one part pro-active, one part protective, to make certain that as we go forward, at any moment in time if we want to choose a new operator, 10 years down the line, the City has its own operations license, its own exhibitors' license," he said.

On Oct. 11, the City of Jackson settled a lawsuit against the zoo. Under the settlement terms, the zoo will not have to pay the City over $6 million in outstanding water bills and mismanaged funds. The City of Jackson inherited all animals, personal property and assets formerly belonging to the Jackson Zoological Society.

The mayor told reporters that the City is in contract negotiations with ZoOceanarium Group. "We are ready to present it before council, and once we present it before council, ZoOceanarium will do a presentation that demonstrates their capabilities, what their successes have been, not only in St. Louis, but in Dubai, their successes all around the world," Lumumba said.

The City had scheduled a press conference on the zoo for Monday, Oct. 28, but city officials issued a statement rescheduling it pending further notice. They did not explain the delay.

Zoo employees lost their benefits when the zoo closed on Sept. 30. They continue to care for the animals and are still without benefits, working on a temporary contract basis, a City spokeswoman confirmed.

Robberies in Jackson decreased by 40% between August and September, a Unified Crime Reporting statistics report from the Jackson Police Department indicates. The capital city had a total of 32 reported robberies in September, down from 52 in August.

Sgt. Roderick Holmes, a spokesman for the Jackson Police Department, said arrests could be the reason behind the decrease, as the same person or group of people are often responsible for multiple robberies. The same could be said for spikes in certain crimes, he said, like burglaries, which might become more frequent if a known offender is released from jail.

The report also found that assaults increased by 10%, from 193 to 213, and there were seven incidents of arson in September, compared to just one last year during this time.

A report for October is not yet available on the City's website.

Although violent crimes declined significantly in Precinct 1, home to south Jackson, from 237 incidents in August to just 53 in September, they have surged elsewhere in the city. Northwest Jackson, for example, saw a 246% increase in violent crimes during the same period. Violent crimes include assault, robbery, criminal homicide and forcible rape.

Holmes commented on the sudden geographic fluctuations by pointing out that crime is never evenly distributed in any city. "Criminals don't stay in one place," he said, adding that while Jackson might be carved up into districts and neighborhoods, that "criminals don't know boundaries," and may try to commit crimes where they think they can get away with it, whether that ends up being the case or not.

"Criminals will migrate throughout the city looking for an opportunity. (Crime will) never be all over the city at one time, that's just the nature of crime," he said.

The report also found that assault remains the most frequently re-occurring violent crime in Jackson.

CORRECTION: An earlier version of this article stated that assault crimes had increased from 32 instances to 53. While assaults have increased, they increased from 193 incidents to 213 incidents. The story has been updated to reflect this.