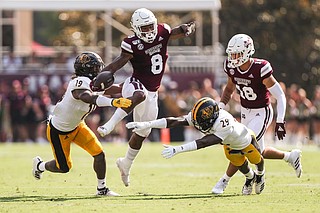 MSU running back, Kylin Hill rushes for the Bulldogs. Courtesy of MSU Athletics.

The first Saturday in November saw the season hanging in the balance for Mississippi State University. MSU entered its game against the University of Arkansas on a four-game losing streak and as the team clung to life for any bowl hopes.

A 3-5 overall record this season left the Bulldogs with little margin for error if the program wanted to keep its bowl streak alive. Mississippi State looked to star running back Kylin Hill to provide the offense and energy the team desperately needed to break the recent cycle of loss.

The Columbus, Miss., native did not disappoint as he ran roughshod on the Razorback defense. Hill amassed a career-high 234 rushing yards on 21 carries and three touchdowns in the Bulldogs 54-24 victory over Arkansas. Hill's previous career high came last season against Kansas State University when he rushed for 211 yards and on 17 carries with a touchdown on the ground and receiving.

His 234 rushing yards are the most by an SEC player in a conference game since Louisiana State University running back Darrius Guice racked up 276 yards against the University of Mississippi. The 234-yard rushing day for Hill is the fifth best rushing game in school history and 24 yards from the school record.

The SEC named Hill the Offensive Player of the Week for his efforts against the Razorbacks. It is the second time Hill has been honored with the award, the first coming from his efforts in 2018 against Kansas State.

Against Kansas State this year, Hill needed 24 carries to get 111 yards and never reached the end zone, and MSU lost 31-24. The University of Kentucky, however, could not hold Hill back as he uncorked 120 yards on 26 attempts with three touchdowns in a 28-13 win.

Auburn University was the first team this season to hold Hill under 100 yards rushing in a game as MSU fell 56-23, with the running back gaining just 45 yards on 17 carries. The University of Tennessee held Hill to 13 yards on 11 attempts in a 20-10 loss and LSU locked Hill down for 34 yards on 15 carries in a 36-13 defeat. The Junior running back failed to earn any touchdowns in the losses to Kansas State, Auburn, Tennessee and LSU.

Hill rushed for 150 yards on 21 carries and scored a touchdown against Texas A&M University, but MSU lost 49-30 to the Aggies. It was the second time this season the Bulldogs lost when Hill went over 100 yards rushing and the first time MSU was defeated when Hill rushed for a touchdown.

In his three-year career at MSU, Hill has rushed for 2,154 yards on 371 carries with 15 touchdowns. Hill has three more games to add to his rushing total for the 2019 season.

Mississippi State needs to earn victories in two of those three games to get the necessary six wins to receive a bowl invite. Currently, there are 46 teams in the Football Bowl Subdivision with six or more wins. There are 40 bowl games to be played at the end of the 2019 season with 80 teams getting invites.