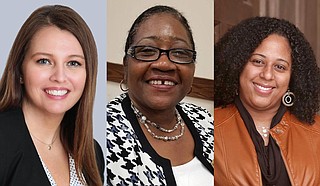 Shanda Yates, a millennial Democrat, could still oust Bill Denny, a top Republican in the Mississippi House, if her current lead in the House District 64 vote count holds once election officials add provisional ballots. With just the Election Day totals counted, the Associated Press reported that Yates led Denny, a 32-year incumbent, by about 51% to 49%, or 136 votes, in House District 64, which includes parts of Madison and Hinds counties.

Yates, an attorney who earned her law degree at Mississippi College School of Law, is a partner with her husband, Yancy Burns, at their law firm, Burns & Associates PLLC.

"I am a working mother. I am a small business owner. I am an attorney. I am a proud public school graduate. Being 'in politics' was never on my radar. But change was," she wrote in a questionnaire for the Jackson Free Press earlier this year. "My husband and I plan to raise our 4-year-old son in Jackson. We have a vested interest in the future of our neighborhoods, communities, district and state as a whole. I am running to be the change that I want to see."

If Yates does emerge victorious once counting is finished next week, she said she recognizes that she must work to address issues that disproportionately hurt African Americans.

"My district is located almost entirely within the city of Jackson. The public schools in Jackson are attended primarily by African American students," she wrote. "I believe that providing a quality education to these students is the first step in addressing many of the issues that disproportionately affects minorities, including job access."

Voters first elected Republican incumbent Denny, the current House floor leader, to the Legislature's lower chamber in 1987. He served in the U.S. Air Force and is a retired executive of Barclays/American Credit, a multinational banking company. In the House, he is the chairman of the Apportionment and Elections Committee, and will lead efforts to redraw House District maps in 2020 if he manages to come back and win once election officials count the remaining ballots.

The Catholic lawmaker has a conservative voting record and is affiliated with the American Legislative Council, or ALEC, a national group that pushes pro-corporate right-wing bills in state legislatures nationwide and has significant power in Mississippi.

Elsewhere, in nearby House District 68, another woman claimed victory on Tuesday night. Democrat Zakiya Summers, 36, the former communications director of the Mississippi American Civil Liberties Union, will be its new representative starting in January. The district includes parts of Hinds and Rankin counties.

In a questionnaire with the Jackson Free Press earlier this year, Summers said she wants to focus on expanding access to health care, criminal-justice reform, improving infrastructure and increasing education quality.

"I will also work toward executing a vision of excellence that transforms District 68 as the go-to community for progress and sustained improvement," she wrote. "... As the next state representative, I will fight to ensure that District 68 gets the resources it needs to improve our schools and our streets, that we implement innovative models to invest in our youth, that we revitalize our assets that bring good-paying jobs and economic growth so that people can work, provide for their families, and have access to all of the amenities that we deserve and need."

Summers won 75% of the vote, easily defeating Republican Jon Pond. She will replace 76-year-old Democratic House Rep. Credell Calhoun, who is retiring from the Legislature in January.

Henley won that DeSoto County House seat in 2015 after beating then-Republican incumbent Rep. Pat Nelson in a GOP primary. The now-defeated representative was one of several House members backed by Empower Mississippi, a political action committee and lobbying organization that pushes for "school choice" initiatives like charter schools and using public funds to support vouchers for private school tuition. That year, Empower gave Henley more than $20,000.

In a press statement, Jackson-McCray's campaign credited her win with "nationwide trends of the suburbs reject the Trump agenda and voting more Democratic." House District 40 include Southaven and Horn Lake, just south of Memphis and the Tennessee border.

"I am excited for the opportunity to go down to Jackson to fight for public schools, better roads and bridges, and access to affordable health care," Jackson-McCray said in the press release.

One GOP House member who resoundingly won re-election on Tuesday is the chamber's top Republican, House Speaker Philip Gunn. On Tuesday night, he resoundingly defeated Democratic challenger and attorney Vicki Slater to retain his seat in House District 56. Gunn ran on a promise to "Keep Mississippi Conservative!," a slogan he used on his campaign website.

His campaign website also pushes a conservative Christian-centric view of his role of government, and references his belief in "the sanctity of marriage"--an anti-gay dogwhistle long used by the religious right. Gunn has championed the passage of several anti-LGBT laws during his tenure, including House Bill 1523, which makes it legal for business owners to discriminate against people on the basis of their sexual orientation or gender identity if they claim a religious motive.

Under his site's tab labeled "Role of Government," Gunn uses a series of Bible verses to describe his beliefs about how government should operate.

"Our first and foremost responsibility is to glorify God and enjoy Him forever. God has established His church as the means through which this goal is accomplished. Therefore, government should not function in a way to supplant or take away those areas of responsibility that God intends to be reserved for His church," Gunn's website reads. "In other words, government should not be set up to receive the glory intended for God, and people should not look to the government for their provision, their dependence or their joy."

Gunn believes government should be less involved in issues like ensuring health care for the poor. While Democrats and some Republicans, including Lt. Gov.-elect Delbert Hosemann (who will serve as president of the Senate come January), want to expand Medicaid access to an additional 300,000 Mississippians in working households, Gunn favors a less active approach to health care.

"We must work with providers to reduce the costs of healthcare," reads the health-care section on his website. "We must ... require the recipients of healthcare services to assume personal responsibility for their health and take care of themselves."