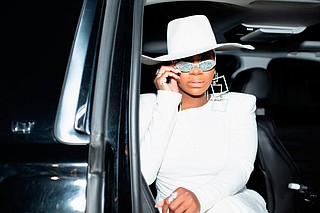 Fantasia Barrino is enjoying a freedom she says she has not felt in years, and it is all thanks to her independent album, "Sketchbook."

The rock soul album released under Barrino's label Rock Soul Entertainment was No.1 in R&B album sales on the Billboard charts for two weeks. The album has marked the beginning of her most public embrace of the rock soul genre, the strongest connection she has made yet with her male audience and the end of her touring career.

Barrino will perform at the Mississippi Coliseum in Jackson on Nov. 15, and she is promising a show fans have never seen before, she says, with a team of all female vocalists and band members.

"Since I won 'Idol,' everyone's goal for me was R&B, R&B, R&B, R&B," Barrino says. "R&B and soul are still the core of me. That will never change, but I wasn't able to really branch out and show people all that I can do."

Barrino won the third season of "American Idol" in 2004 and became the first artist in Billboard Hot 100 history to debut at No. 1 with her single "I Believe." In the years that followed, Barrino earned another No.1 single, a Grammy and three No. 1 R&B albums.

Barrino says she learned how to embrace other genres as she embarked on her second Broadway show "After Midnight," performed at the Kennedy Center with the National Symphony Orchestra and toured with opera singer Andrea Bocelli.

"All of these things that I have done, I am able to take on this tour and bottle it up on the stage and present it in such a grown and sexy way," she says.

The reception to the album, specifically from men, has surprised Barrino. She says she sees them more often at her shows.

Barrino says that while songs like "Holy Ghost" reference her 30-year relationship with God, "the hardest man on the block" cannot help but sing along when the beat drops.

Barrino says she listened to the music her husband enjoys to learn how to connect to men. Not only did her husband's music tastes inspire the beats on the album, but he also inspired the "Cancer woman, hopeless romantic" part of Barrino to shine.

Growing up, she listened to artists like Luther Vandross and Aretha Franklin and fantasized about finding the love they sang about. As she got older, she says she was unsure if finding true love was possible. That doubt faded when she met her now-husband Kendall Taylor, and she worked to embody all of those feelings with the ballad "Enough."

"I think, 'Mission accomplished,' with that. I had Anita Baker to sign off on it. She even texted me one day and was like, 'Who wrote it? Oh my God,'" Barrino says. "And that for me made the biggest smile on my face because she's a legend in the game who comes from real music."

Barrino says fans haven't been able to name what is different about her music, but it makes her feel good to know they see a change.

When Barrino tweeted that the tour would be her last, fans speculated in the replies about her returning to Broadway or starting her own ministry. She affably laughs at these guesses.

"I've been doing this now for 16 years, and I'm not saying I'm going to stop performing. But there is a different sound that is about to come out of me, and I've got to sit back. And I've got to be obedient," Barrino says. "I feel very proud of myself for taking it out the way that I'm taking it out."

For more information on Fantasia, her music or her current tour, visit her website.